How can they see the chairs through the Dark Water?

In the Doctor Who episode "Dark Water" (S8E11), hundreds of human skeletons are seen sitting in the eponymous "dark water", which Dr Chang describes as follows:

It's so cool. Look at this. We call it dark water. Only organic matter can be seen through it.

He demonstrates by putting his arm into a jar of the stuff; he's wearing a jacket and wristwatch, but through the water only his bare arm can be seen. 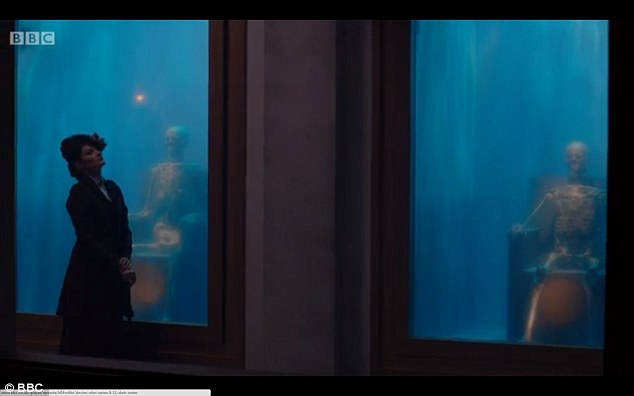 Given the way this stuff works, how is it possible to see the chairs that the skeletons are sitting on?

Obviously from the out-of-universe perspective, the reason is so that at first glance they seem like just normal skeletons and only later we realise there's something else around them. If they were apparently suspended in a sitting position mid-water, we'd realise much sooner that something was up. But what's the in-universe explanation, given the way this water works?

Perhaps the chairs are made of wood or some other organic material? The inference is that you cannot see the alloys that make up the cybernetic part of the cybermen inside.

That said, there is a much greater inconsistency. All you can see inside the cybermen is the human skeleton, implying that any flesh has rotted away. What is the point of that? Cybermen are cybernetically augmented humanoids - they are meant to be an enhanced human, not just a robot with a brittle, human skeleton inside. What would be the point of that?

Previous scenes of cyber-conversion have shown that the human flesh remains alive inside. In the episode 'The Next Doctor' a 'Cyber Leader' has a partly transparent head through which you can see his human brain. Bill Potts cried a real tear inside her cyberman suit. There was the 'Cyberwoman' in Torchwood whose face you could still see, and another episode from classic Who that I can't remember the name of where there was a partially converted Cyberman looking quite similar. The flesh is evidently meant to be kept alive inside the Cyberman suit, so quite why you can only see the skeletons in this episode when, as you point out, you could see Dr Chang's flesh, is a bit of a mystery.

I think you'll have to write this one off as an ill-thought-out plot-device designed solely to keep the identity of the Cybermen a secret until the big reveal, and which defies explanation.

2
How does CyberMaster regeneration work?

3
Can Weeping Angels See In the Dark?
4
Fifth Season Finale- How can the Universe still exist?
14
How do Time lords/Gallifreyans breed, and can they do so with humans?
8
How can this character be dead?
6
How come the Doctor and Clara will never be able to see each other again?
1
If the ghosts only come out at night, how can they change the daysettings?
4
How do the bugs do what they do?