This is a story I read as a teenager, if I remember correctly, more than 40 years ago and I only remember vague glimpses that I find hard to put into words, so I do realise it may be a very tall order. As far as I remember, it was a novel, but not a long one. It may have been part of a series, but as far as I remember, it was readable as a stand-alone novel. I didn't entirely understand the story back then, and but I remember enjoying it and now I'd like to find it again.

The main thing I do remember was that the main character was a young woman, who loses her memory for a longish time because something like a bird(?) comes flying and inserts a silver(?) needle into her head, but she regains her memories when it is removed. The setting of the story is on the moon(?), which has been terraformed, and I seem to remember that it was slightly 'medieval' in some ways, with kings(?) and a kind of magic or similar.

This sounds like the Darkangel series by Meredith Ann Pierce.

It's set on the moon, a long time after it's been abandoned, terraformed and populated by mythic creatures who go on medieval-style quests. Inhabitants included creatures like the Sphynx, because the moon at some point had been almost like an amusement park for humanity-that-was.

At one point in one of the sequels (A Gathering of Gargoyles and The Pearl of the Soul of the World), the main character, Ariel, has her heart pierced by a shard of ice and wakes up... different. There's no needle in her head that I remember, but the other points are so unique to this trilogy that I think even if you're mixing it up with something else, Darkangel is part of it.

Perhaps the bird-like creature was the Darkangel himself? Does this cover look familiar? 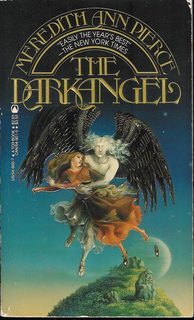 There's magic in the story - for example there's a cloak of invisibility.

Not the answer you're looking for? Browse other questions tagged story-identification novel moon or ask your own question.

9
Girl living on the moon, flying, trip to Earth
6
Novel about a girl who dreams the deaths of her classmates
22
Novel about rich industrialist who is recruited by a woman who uses magic, takes him to her world were he crash lands
7
Space sci-fi movie where a woman goes to space and loses her memory
7
Novel about a woman who is transformed into an elf
10
Science fantasy novel from the 80s/early 90s where an imprisoned woman is sent through time to a different kingdom
7
Isekai manga about a woman transported into a VR game based on a novel she wrote
22
Scene from a forgotten SF novel where a woman voluntarily drops into molten lava