How does Rogue from the X-Men fly?

This has been a question which has bothered me for some time, as a subset of "various types of flight" in the Marvel comics. Among the X-Men specifically, it's a ubiquitous ability, mostly held by females. But each type of flight has a different logical basis...

But... how exactly does Rogue fly?

Yes, we know Rogue got that power, her durability and super strength permanently from Ms Marvel, who has Kree DNA, so that gives an origin .... but it still doesn't explain the basis or physical explanation of the power.

Even Rogue HERSELF isn't too clear on how that ability works! This was even lamp shaded somewhat nearly 30 years ago in Fox's X-Men: The Animated Series the first time she met Angel. You can see it here; go to the 3:00 mark:

So I was curious as to what canon explanation, if any, was given for her flight. I thought one might be available in an addition of the Marvel Universe Encyclopedia, but the 2 I found didn't offer much. Canonical information would be preferred, but theories or explanations from panels in the comics would also be helpful.

Assuming that Rogue perfectly copied Ms. Marvel's abilities, then flight is done by "sailing along the Earth's electromagnetic field". 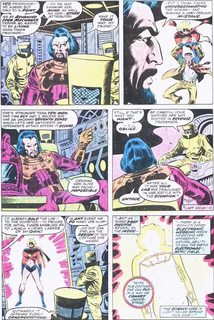 As per CBR's How Did Carol Danvers Gain the Ability to Fly article indicates, originally this was only possible due to her costume, which heightened her natural ability to do this sailing, but an encounter with MODOK reveals that the second blast from the psyche-magnetron transferred the flight abilities of the suit directly to her body. 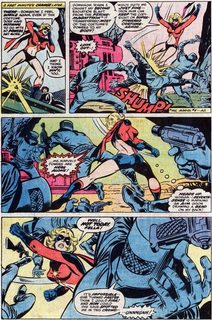 Not the answer you're looking for? Browse other questions tagged marvel rogue or ask your own question.

16
Why doesn't Rogue have super strength and the ability to fly?
10
Does Rogue absorb only mutant powers of those she touches?
42
How much of Thor's power could Rogue steal?
11
Why does Rogue say she is "half-alien?
7
Where does Rogue get her name in the X-Men movies?
12
Does Rogue ever take advantage of the removable power suppression we see?
3
When/how did the marauders capture Rogue?
3
Does Rogue absorb skills?
6
Can Rogue absorb and utilize powers from multiple mutants simultaneously?
2
What was the highest use of raw strength used by Rogue?