Novel about two princesses in a fantasy world, one falls sick and the other travels to find a cure

I'm looking for a story that I read back when I was a child. Around 2005, maybe? I recall the book seeming pretty old, but it was from a public library, so it could be simply deteriorated by usage.

The world is being afflicted with a mysterious sickness that has no cure and no one knows where did it come from (it is called gray fever, gray plague or something like that).

But in reality, the elder one falls sick and the young one is forced to depart. I recall some sort of mage/warlock that helps her giving her a pair of boots that would let her walk big distances almost instantaneously. I also recall the younger one being trapped by a dragon, and in the end the elder one dies from the sickness, but is saved being transformed in a fairy. I also think the sickness is eradicated in the end.

A Google search on "sick princess transformed fairy" quickly reveals the answer: The Two Princesses of Bamarre, a 2001 novel by Gail Carson Levine, the author of Ella Enchanted.

The story revolves around the lives of two sisters who are very close, but as different as night and day. When one of them falls victim to a deadly disease sweeping the kingdom, the other must find her inner strength and bravery to discover the cure, and save her elder sister.

Meryl also tells Addie that she, too, was one of those on the brink of death when the rain came, so the fairies could not truly save her. However, they offered to transform her into a fairy and join them in an endless battle against fearsome, monstrous creatures, the outcome of which affects the world below. Meryl accepted the offer, and is now a fairy, unable to return with Addie. 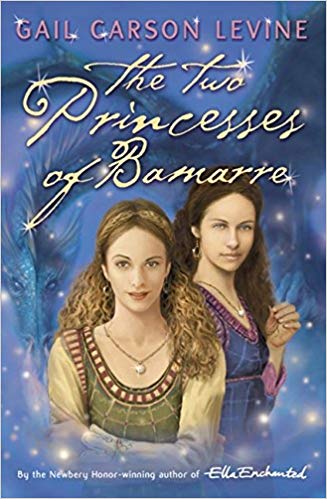 5
Fantasy novel series with paraplegic protagonist who travels back and forth between Earth and his world
8
What episode of what show had the devil saving a singer's life?
8
Girl with magic confronts a demon and heals tree
33
Old science fiction novel about a man of the near future awakening from suspended animation to find himself in a technophobic theocracy
7
Fantasy novel about a world with mechanical dragons
12
Fantasy novel with two dream-like worlds, one good and one bad
9
Identify story/novel: Tribe on colonized planet, not aware of this. “Taboo,” altitude sickness, robot guardian (60s? Young Adult?)
6
Dystopian novel, main female character escapes a which factory marks girls with numbers