Was the painting “In the Ring of Saturn” by artist Andrei Sokolov used as a book cover?

The BBC News exposé 'Our Saturn years'; Cassini's epic journey to the ringed planet, told by the people who helped make it happen includes the text:

“Saturn is the most spectacular planet in our Solar System. The incredible rings, visible even in binoculars or a small telescope, make it stand out compared to all the rest.”

In places, the rings are only about as tall as a telephone pole. Yet from end-to-end they are more than 20-times as wide as the Earth.

They have influenced decades of science fiction book covers.

Followed by a reproduction of the painting In the Ring of Saturn by artist Andrei Sokolov.

The painting is stylized and shows a spacecraft beaming something to the planet Saturn, with the suggestions of the planet's rings in the background, all in various shades of green and yellow.

Question: But there is no indication that this art is related to any specific book cover. So I would like to ask; Was the painting “In the Ring of Saturn” by artist Andrei Sokolov used as a book cover? If not, was any of this artist's work used in book covers?

Andrei Konstantinovich Sokolov (1931—2007) was a Soviet and Russian science fiction painter and a graphic artist, a designer of stamps, an architect.

For some other examples of work by the artist, see for example 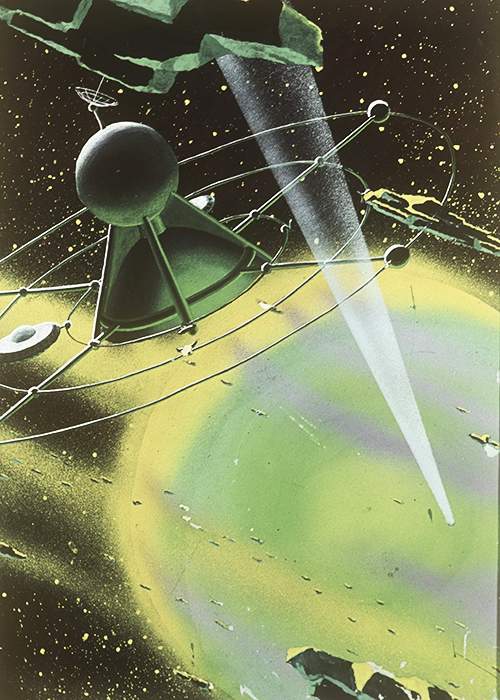 The ISFDb page for Andrei Konstantinovich Sokolov (Андрей Константинович Соколов) does not list "In the Ring of Saturn" as one of the works that have been published as cover art.

Not the answer you're looking for? Browse other questions tagged books art cover-art or ask your own question.

4
Wanderers of Time & Next of Kin Cover artist
6
Book cover-art: Desert with mesas and a city-ship on top
27
Complicated story identification from book cover
5
Which comic book cover has had the most homages?
9
Fantasy book cover with tree trunk and boy with skin like tree bark
3
What is the original work used for the album cover of Endless Power by Conquest?
9
Fantasy book trilogy about painting