I'm a huge fan of the 1994 Spider-man TV show. Which of the Spider-man comics align closest with this show?

Answer: The series most closely resembled the early years of the Amazing Spider-Man comic (post the Gwen Stacey years) with Parker struggling to pay his bills, handle a job with the Daily Bugle and dating Mary Jane. He meets with almost all of his classic villains (as the show was very villain-centric) including Venom and Carnage. Part of the show's villain-centric nature was its initial design as a merchandising vehicle.

Spider-Man, also known as simply Spider-Man: The Animated Series or New Spider-Man, is the fourth animated television series in the Marvel Animated Universe. It is the third to feature the character of Spider-Man after Spider-Man (1967), Spider-Man (1981), and Spider-Man and His Amazing Friends. The series ran for five seasons for a total of sixty-five episodes starting November 19, 1994 and ending January 31, 1998.

While this was one of the longest running Marvel animated series, it was fraught with production and merchandising battles, scripting limitations, animation errors and extreme censorship. Adding insult to injury, Marvel was going through bankruptcy at the same time. Despite these challenges the series won Annie Award, an Image Award and a NAACP Image Award.

Because of Marvel's challenges at the time, John Semper, Jr who was working as the primary story editor and writer was able to use almost any characters he wanted to without a whole lot of hassle, which allowed Dr. Strange, Blade, and the X-men to appear. He even adapted the Clone Saga (called the Spider Wars in the animated series), one of the most popular of the Amazing Spider-Man stories with almost no comment; granted the story was VERY different from the one in the comics. 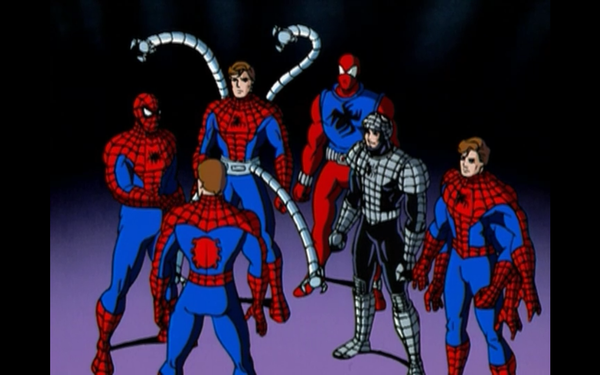 The Spider Wars - the Animated Series version of the Clone Saga

Not the answer you're looking for? Browse other questions tagged marvel spider-man spider-man-tas or ask your own question.