A few decades ago I read a story, I think possibly about first contact or solar system colonization conflict, which included an interesting sociological setting.

The premise was that, as automation replaced human labor, ultimately the entire populace either consumed or was involved in the creation of entertainment media, and the "executive producers" and other high-end staff engaged in that global endeavor were akin to the tech giant moguls of today.

If it was indeed first contact, it would have possibly been conflict-based akin to Starship Troopers or the Chanur series, if I remember that correctly. Unfortunately, the main plot line is the less well remembered, versus the subplot of "media production as the primary focus of human endeavor" sub-theme.

I'm afraid I don't recall much more, other than that the two main protagonists were siblings or other relation, one of which was such a media maker executive and the other a military or political figure involved in the main plot line.

I would imagine it was published in the mid-70s to early 80's, since that's the period in which I was voraciously consuming sf paperbacks.

Any candidates based on these scanty clues?

"A World Between" (1979) by Norman Spinrad has several of these elements.

The planet, Pacifica, is the Utopian media center of the galaxy. You have Chairman Carlotta Madigan and her lover and Minister of Media, Royce Lindbold. However, sinister external forces have attacked using propaganda, misinformation, and social attacks using the same media freedoms that make Pacifica great. The Utopian society begins to fracture along gender lines, characterized as the "Pink and Blue War." Madigan and Lindbold find themselves pulled in opposite directions. 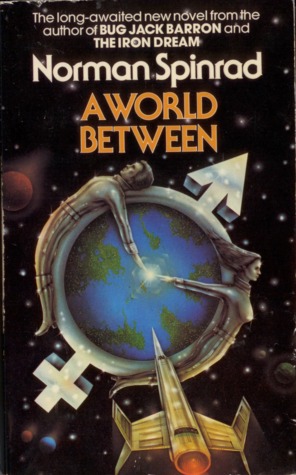 12
Help identifying fantasy trilogy with magic music
20
Science-Fiction Novel - Female Mathematician - Late '90s?
9
Looking for title/author of SF novel about malevolent creatures/gods residing inside stars
6
Three interconnected stories with main character going off the grid and drilling into the earth
33
Old science fiction novel about a man of the near future awakening from suspended animation to find himself in a technophobic theocracy
8
SF novel — the only human on a space station full of aliens
13
Science fiction novel with forced sex change
13
Science fiction novel involving humans colonizing an alien planet