In an episode from a late 1970s to mid 1980s sci-fi series, the story revolved around an odd couple: a child-sized adult alien and an adult-sized child alien. What else I recall of the story is that the aliens' maturation follows the opposite path of that of humans. Children are adult sized and diminish to child size as they reach adulthood. The story is absurd and almost embarrassing, yet this is what I recall.

The name of the alien child may have been spelled and pronounced "Rokkos." I'm not entirely sure of the spelling and it could be a variant: Roccos, Rokos, or something similar. After several decades my memory of its pronunciation may have faded, though I am certain that the name began with an 'r,' had two vowels, both 'o,' and concluded with an 's.' Many google searches brought me completely unrelated results such as Rocco's Pizza and Spanish grocery stores.

One final detail is that, as per 1980's plastic aesthetics, both child and adult alien were clothed in golden gauze tunics and baggy pants with equally ridiculous gold-colored nylon page boy wigs.

I'm pretty sure this is an episode from the second season of Buck Rogers in the 25th Century, "The Golden Man".

Wikipedia only has this brief description:

After finding a lifepod containing a golden-skinned boy, the Searcher drifts into an asteroid field and becomes stuck against one of the rocks. The only way to free the ship may reside in the strange molecular-altering powers of the boy's companion, the "Golden Man", who is being held captive on a nearby planet inhabited by a penal colony. Once the criminals learn of the alien's powers, they force him to repair a makeshift spacecraft so they can escape. Buck and the golden boy must rescue the golden man from his captors before the Searcher is destroyed.

but other reviews and summaries do talk about the backward aging and name the taller one as "Relcos", which is pretty close to what you remember. 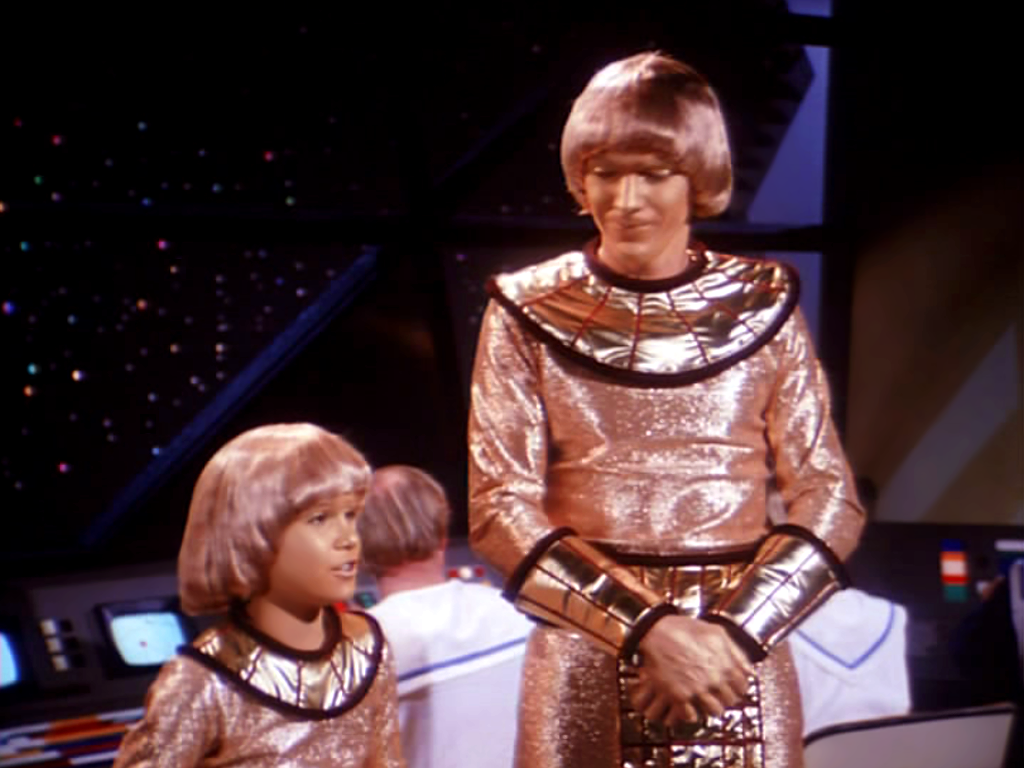