This is in the comic continuity, not the TV show, but at one point, Matt Murdock was outed as Daredevil. I know he turned down an invitation to the Avengers because of it, recommending Ronin to serve in his place. This was from The New Avengers a few years back (issue #11, 2005). 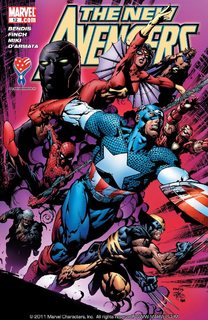 I failed to keep up with the story, so I don't know if this was retconned, if he took on a new identity, or much like the "history rewrite" of One More Day when Peter Parker's identity was reverted to being a secret, if something like that happened.

Can anyone provide any details, please?

No, it isn't (currently). A new volume was started some years ago (volume 5, launched in 2016) where Daredevil's identity wasn't public knowledge anymore. The exact reason was voluntarily kept secret for a couple issues.

Reminder: the Purple Man is a powerful villain with psychic abilities. The Purple Children are some kids who share similar powers, and same purple skin.

Then, it was revealed in issue #20 of Daredevil (2015) that the Purple Children, that Daredevil had helped way earlier (Daredevil #10, 2014), wanted to pay him back. Purple Man used a machine to amplify his powers at some point; long story short the Purple Children turned it against him and used Purple Man's power to erase everyone's memory of Murdock being Daredevil.

Daredevil quickly realized nobody remembered anymore. Especially, he wouldn't believe Foggy did not recognize him (when under the mask), and unmasked himself before Foggy, who went into quite a shock.

So far not many "ordinary" folks have regained that knowledge.

Not the answer you're looking for? Browse other questions tagged marvel comics daredevil secret-identity or ask your own question.

13
Why did Danny Rand (Iron Fist) pose as the Daredevil?
32
How true to the comics are Matt Murdock's powers in the 2015 Daredevil TV show?
6
In the comics, who made Daredevil's costume?
11
How did Stick find the young Matt Murdock?
7
Who is this character on the variant cover of New Avengers #1
3
What should I read before watching Daredevil Netflix series to avoid the series spoiling the comics?
1
Spider-man histories between Civil War and Secret Invasion
5
Does Wilson Fisk discover that Matt Murdock is Daredevil?
13
How does the *in-universe* Marvel Comics handle sensitive information like secret identities?
2
Do we know anything about DareDevil's (Matt Murdock's) Mother from the comics continuity?