This was a movie I saw a few times on British TV during the 80's, but I don't think it was much older than that. English language, almost certainly American-produced. I think it was an action movie, driven by a multiple murder plot.

The main scene I remember (I really want to say it was the opening scene, but I'm not 100% certain of that) had a couple running along the beach being filmed for a commercial, and the production crew were upset that when they jumped they weren't twisting as far as the computer said they should.

I think there was also an early scene where an actress fell from a hotel window, which was later discovered to be murder, though I might well be conflating another movie there.

I know this isn't a lot of detail, but it's been bugging me recently and I'd really like to know what it was. Thanks. 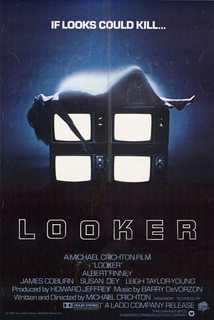 Dr. Larry Roberts (Finney), a Beverly Hills plastic surgeon, is puzzled when four beautiful models working in television commercials request cosmetic surgery to make changes so minor as to be imperceptible to the naked eye. When these models later start dying under mysterious circumstances, he discovers they are all linked to the same advertisement research firm.

The Digital Matrix research firm rates advertising models using a scoring system to measure the combined visual impact of various physical attributes in television commercials. In an experiment to increase their scores, some models are sent to Dr. Roberts to get cosmetic surgery to maximize their visual impact. Though the models are physically perfect after the surgery, they still are not as effective as desired, so the research firm decides to use a different approach. Each model is offered a contract to have her body scanned digitally to create 3D computer-generated models, then the 3D models are animated for use in commercials. The contracts seem to be incredibly lucrative for the models; once their bodies are represented digitally, they get a paycheck for life, never having to work again, since their digital models are used for all their future work in commercials.

However, when these same models start dying under mysterious circumstances, Roberts becomes suspicious and decides to investigate Digital Matrix. He has a strong interest in investigating the deaths: he is considered a prime suspect by the police (from evidence planted at the scene of one of the murders) and his most recent patient, (with whom he is in a relationship) Cindy (Susan Dey). Cindy is the last of the models to be digitally scanned.

During his investigation, Roberts discovers some advanced technology that the Digital Matrix corporation is using to hypnotize consumers into buying the products they advertise. He also discovers the Light Ocular-Oriented Kinetic Emotive Responses (L.O.O.K.E.R.) gun, a light pulse device that gives the illusion of invisibility by instantly mesmerizing its victims into losing all sense of time.

Found by searching for film murder "actors replaced * computers", which took me to the Wikipedia entry for Virtual actor, which mentions Looker.

This review mentions the falling death:

.... Stalked by a shadowy figure hiding behind her curtains, Lisa (Terri Welles) falls to her death from the balcony of a glass-laden apartment after being inexplicably frozen by some sort of unseen interval-halting firearm.

8
Movie about a mysterious girl who turns out to be an alien
83
Movie with magical book showing events of any day in history, except missing days of the Gregorian calendar change
4
Movie circa 2005? Involves cops, gangsters, demons?
9
Horror movie which takes place in an old house with a girl with powers.
3
Probably a 90s/or early 2000's movie with a female alien/mutant burnt alive
5
Movie with zombie young girl attacking parents
20
Movie where some soldiers go into a bunker in a city because of dangerous conditions outside