We see schematics of craft like the x wing's repusorlits (below) 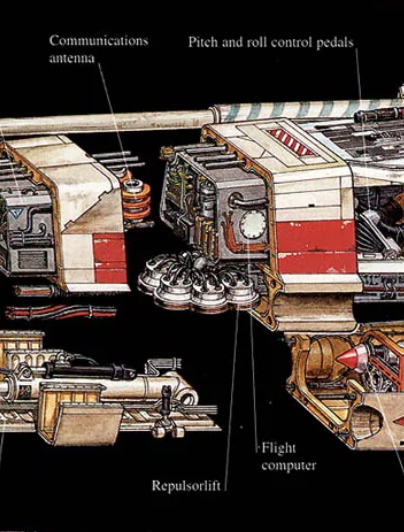 But it appears to have a sort of downwards constructed appearance. If repulsorlifts are the main source of lift in a planets sphere of influence, then why do we sometimes see these craft rolling and flying upside down relative to the planets surface? Do repulsorlifts work in all directions? If it only works downwards, if we say tilt the aircraft to the side slightly, would it drift off to the side?

In Legends, repulsorlifts have been shown acting in directions other than fixed-downward. However, they are somewhat weaker in that position. For instance, in X-Wing: Wraith Squadron, the Corellian Corvette Night Caller stands on its end on repulsor power:

He continued to raise the bow of Night Caller until the ship was pointed straight upward. He felt a shudder as the ship's repulsors were called on to hold a position they were not designed to assume; only the moon's four-tenths of a standard gravity allowed the maneuver at all.

So while it is possible to maneuver in different directions with repulsors, they do have a definite direction that they're meant to thrust and are weaker in other directions.

In another incident in Solo Command, something similar happens with an improvised speeder:

He'd installed computer gear to ensure that the [repulsor] unit would exert appropriate downward force even when the unit was tilting, would detect obstacles, would exert repulsorlift power against obstacles....

His floating sled spun haphazardly, coming within half a meter of a shelving unit before the sled's repulsor unit reacted to the proximity of the thing and bounced him back the other way.

Presumably actual speeders and other vehicles are equipped with the same sort of software, allowing them to orient themselves on the ground without tumbling too much.

Repulsorlifts cannot work upside down as they create an anti-gravitic effect, basically repelling the local gravity in order to allow a vehicle to float. Thus they needs to be always angled towards the main source of local gravity, usually the center of the planet or moon the vehicle is standing upon.

As stated in the relevant Wookieepedia article:

Canon: Repulsorlift was a technology that allowed a craft to hover or even fly over a planet's surface by pushing against its gravity, producing thrust.

Legends: The repulsorlift or repulsorlift engine, often referred to simply as a repulsor, was an anti-gravity technology capable of levitating an object.

Repulsorlifts are the main source of lift on a planet surface, but they're not the main source of thrust: every vehicle we've seen has some sort of reactor to propel it forward, from Luke's landspeeder to the Imperial bikes used on Endor to the X-Wings. Which is how they can move and perform maneuvers.

X-Wings, for example, can fly upside down and roll much in the same way planes on our planet can do such maneuvers: because they rely on their speed and their wings to produce air lift and keep them in the air while they maneuver.

A stationary vehicle, relying only on its repulsorlift to keep it up, would probably drift to the side if it was tilted too strongly to one side, although it seems likely that those vehicles are equipped with a system equivalent to gyroscopes that help keep them in place. We can see it when Luke jumps on his landspeeder: it tilts some but doesn't seem to drift to the side, or, during the bike chase on Endor, when Leia jumps off her bike and it sways from side to side but keep flying in a straight line.

23
Why did the wampa put Luke Skywalker upside down in the ice cave on Hoth?
12
How did the Rebels know the shield was down?
5
Force Work Infinite Recursion
7
Does standing or hanging upside down improve one's connection to the Force?
5
Are repulsorlifts anti-gravity?
30
Do shields on small craft work?
27
Can droids be shut down manually?
10
How do Imperial prison cells work?