Why are there sphinxes at the entrance to the Citadel?

The gates of the Citadel at Oldtown are flanked by a pair of Sphinxes, a male and a female: 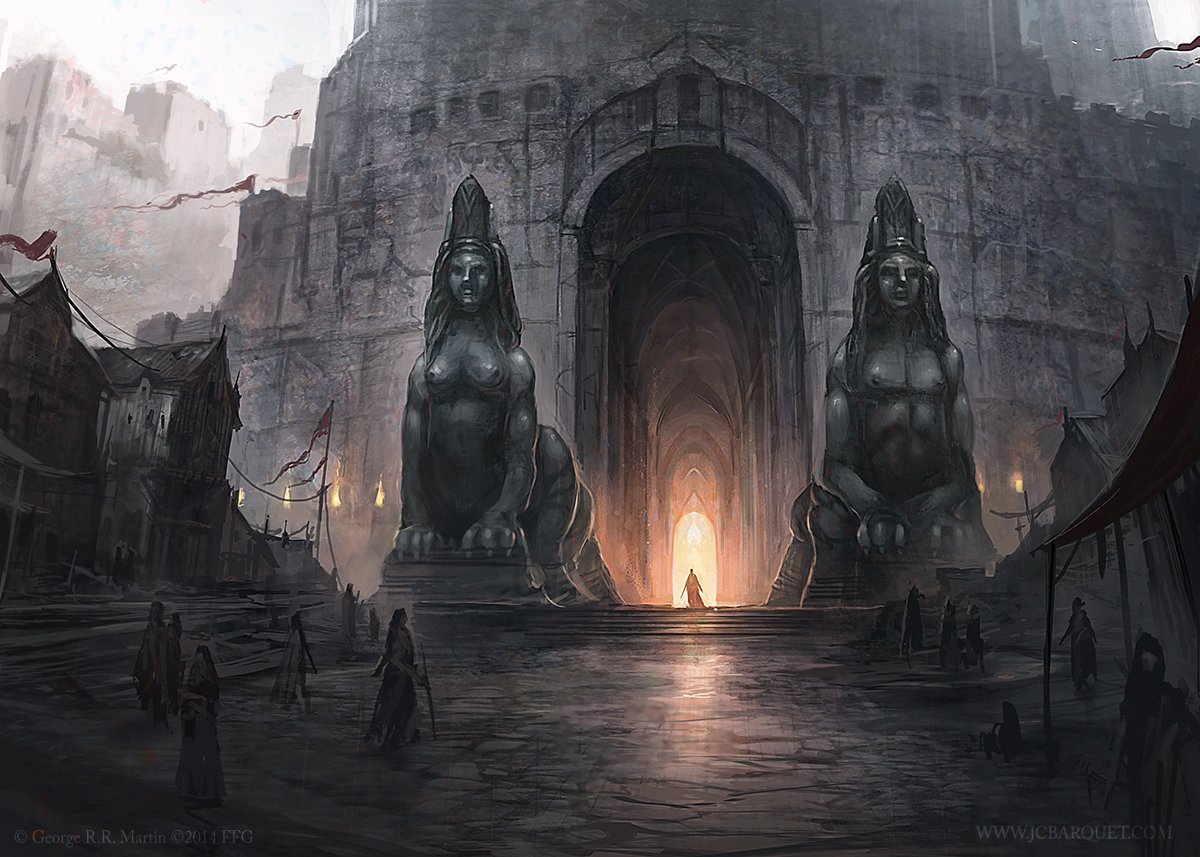 Do we know anything about why and how they got to be there?

They seem to be common enough ornaments, and certainly apt for a place of study.

There are a few references throughout the books to statues of Valyrian sphinxes appearing in prominent places: outside the council chamber in King's Landing, outside the Citadel in Oldtown, and flanking a road in the Velvet Hills of Essos:

The next evening they came upon a huge Valyrian sphinx crouched beside the road. It had a dragon's body and a woman's face.

"Her king is missing." Illyrio pointed out the smooth stone plinth on which the second sphinx once stood, now grown over with moss and flowering vines. "The horselords built wooden wheels beneath him and dragged him back to Vaes Dothrak."

They seem to be "a thing" in the world of Ice and Fire, built by powerful people in certain significant places.

Also, they are certainly associated with riddles just as in the real world:

"The dragon has three heads," [Alleras (nicknamed the Sphinx)] announced in his soft Dornish drawl.

"Is this a riddle?" Roone wanted to know. "Sphinxes always speak in riddles in the tales."

-- A Feast for Crows, Prologue

So it seems apposite enough to place sphinxes outside the Citadel, a place of academic study, fit for those who can solve riddles set by such creatures. In the real world, sphinxes are often seen as guardians, asking questions to test the intelligence of people seeking to enter a place. If the same is true in the world of Ice and Fire - and what little we know about sphinxes there does match with the stories in the real world - then it would make perfect sense to place them outside the Citadel.

8
What methods to reproduce/copy books are available in the world of Game of Thrones / ASOIAF?
5
Can white walkers and wights pass through the gates on the wall?
6
How do genetics work in Game of Thrones?
4
How does the Citadel feel about Cersei's actions?
9
How are the students at the Citadel recruited?
28
Which libraries exist outside the Citadel?
18
Are the Maesters on the Wall always members of the Night's Watch?
23
Does the Citadel charge tuition?