Is there an in-universe explanation for the American flag in HBO's series Watchmen?

In HBO's TV adaptation of the Watchmen, during the pilot episode, the American flag hanging Angela Abraham and her neighbour's porch is really different (image below). 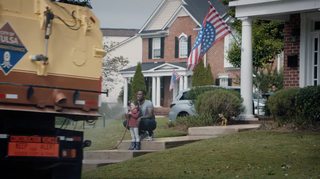 At first I assumed that the flag might be as such in the said Watchmen universe from the show. However later in the episode while Looking Glass is interrogating a suspect, another American flag is shown in the background, that is same as the real-world flag (image below). 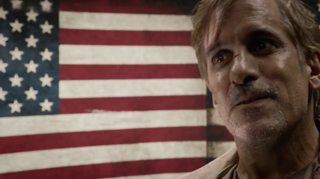 Is there an in-universe explanation as to what the different American flag stands for?

It's the Vietnam flag

In the first episode Angela Abraham recounts to her class that she was born there (post victory by Dr Manhattan) before coming to the US mainland as a child.

In a scenario like Watchmen, the victor is unlikely to "rebrand" so the US would likely only add a star to the existing flag (to keep recognition and fear by their enemies), however the loser (Vietnam) would be changed to have affinity with their new masters.

The traditional Vietnam flag is a simple star in a plain color, this is matched by the circular stars in the stripes of the new flag.

Given Vietnam is a country that has become a state in the world of Watchmen it wouldn't be unusual for its people to use both their flag and the US one.

Not the answer you're looking for? Browse other questions tagged dc tv watchmen or ask your own question.

24
Is there any information about what Alan Moore had in mind for expanding the Watchmen franchise?
14
Is there an explanation for why Silver Age Batman used guns?
43
What did Comedian mean by this comment about the American dream in the Watchmen movie?
7
Is there a way to relate each of the characters in Moore's Watchmen to the inset “Tales of the Black Freighter”?
3
Were there plans for the rest of The Original Series’ five year mission?
11
What is the in-film explanation for Comedian's crying?
2
Is there a single canon explanation for Superman's strengths and weakness?
39
In the Batman TV series, was there an “up” mode for the Bat Pole?