What does Yoda's species eat?

I am phrasing the question like this because of possible spoilers for current or upcoming Star Wars material. Yes, I'm being deliberately vague about even what series or movie I'm protecting.

What evidence exists in which levels of canon about the dietary habits of Yoda, Yaddle, or possibly other members of their species?

Paleontologists deduce the eating habits of extinct animals by analyzing the shape (morphology) of their teeth. Consider how we use our own teeth: The front teeth (incisors) are knifelike and used to tear large pieces of food (such as an apple) into manageable chunks, and the fangs (canines) act like stabbing knives. The back teeth (molars) are relatively flat and used to crush chunks of food into a digestible mass. Mammalian predators tend to have more prominent incisors and canines than we do, and their molars tend to have sharp ridges that allow the opposing teeth to act like a pair of scissors rather than a mortar and pestle; they bolt their food without grinding it. Herbivores tend to have more prominent molars that allow extensive grinding to release nutrients from tough leaves and other plant matter. Humans are omnivores with a relatively versatile set of teeth.

We can apply these concepts to Yoda's species, but the results are somewhat inconsistent, as shown in this selection of photos. 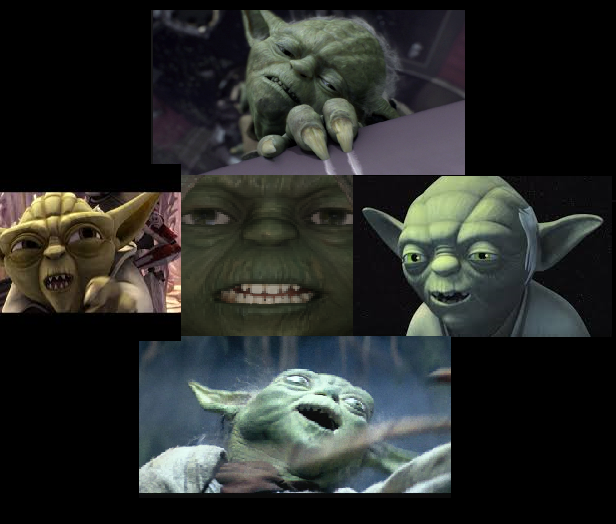 His teeth look very human, if well worn, in most scenes, with visible incisors and canines in the middle photo; we can't see whether molars exist but the shape of the jaw suggests that there are additional teeth. Yoda could be an omnivore based on these photos. In the left scene his visible teeth look triangular and sharp, clearly the mouth of a predator, but this scene doesn't seem to be from the main series of films. As Valorum points out, Yoda has also been seen making a vegetable stew, so he eats plants at least. Conclusion: Yoda's species is omnivorous but Yoda himself may practice vegetarianism.

While on Dagobah, Master Yoda ate fruit and seeds. It's not clear if he's a vegetarian

Soon, the lowlands would all be marshy swamp again, and he would plant last season’s seeds. Then, before the sun began its long journey away, they would sprout. The gray clouds would come back and hold in the planet’s humid air, and the sprouts would grow and flower and yield their fruit before a quarter orbit had passed. And by then the sun would be far enough away that the rains would plunge down again, and the floods begin their inundation, and Yoda would trudge back to the uplands, carting behind him the food for the long season.

Star Wars: From a Certain Point of View - There is Another

He also chews his gimer stick, a gift from the Wookiees, but largely for its medicinal properties, and we see him and Luke eating "root leaf stew" which apparently contains various roots, leaves and swamp weed although the 'Human' version of that stew contains meat.

42
What are Luke and Yoda eating in Yoda's hut in Episode V?