I'm searching for a book I've read during the mid-90s in German. But I think the book was older, maybe classic Science Fiction and was translated from English.

What I remember from the plot:

It starts with a common man who just lived his life but the life has started to fall into pieces. He has two children with his wife, but as requested the children are genetically enhanced and have extreme high IQs. They have left their parents willingly for a special school, and they were even before not much child-like.

This drove his wife into insanity (or into alcoholism/drugs). On his way home he find a body near their apartment and he fears to get convicted for the murder, cause he is the first one who is seen near the body.

Later his wife is executed for the murder, without a trial. She is put to death in a public arena with a laser. (But I think his husband didn't know this. He isn't informed. To him, she just has disappeared)

With his life torn apart, he takes up running and on one day he even runs outside the city.

The whole population lives in cities and many depend on social support in form of nutrition bars from a local food bank. There were events of nutrition bars being poisoned. Being outside of a city is counted as suspicious behavior. Everything is controlled by a big AI.

He encounters kind of a resistance movement outside the city and he joins them, eventually. In German the resistance was called "Renegaten" thus the term in the original might be "renegades".

The resistance owns a big AI too, and during the endgame, their AI fights the government's AI. I remember the scene in which the renegade AI bids farewell to the main protagonist.

I can't remember how the book ended but I think the renegade AI 'died'.

The book had a distinct 'classic US science fiction' feel to me, but a translation from another language like French or maybe even Russian wouldn't be out of the question.

Anvil of the Heart, by Bruce T. Holmes. Written in English. The novel's ISFDB listing mentions a German translation that was published in 1988. It previously had English-language editions printed in 1983, 1984, and 1985, but apparently no further reprints since the 1980s. (Except in the sense that a Kindle e-book version of the novel is available on Amazon -- I linked the Amazon entry to the title at the start of this paragraph.) Here are two cover-scans of different editions -- the first is the same version that's in my collection; the second is from what was apparently the only German edition of the book. Perhaps the latter looks familiar? 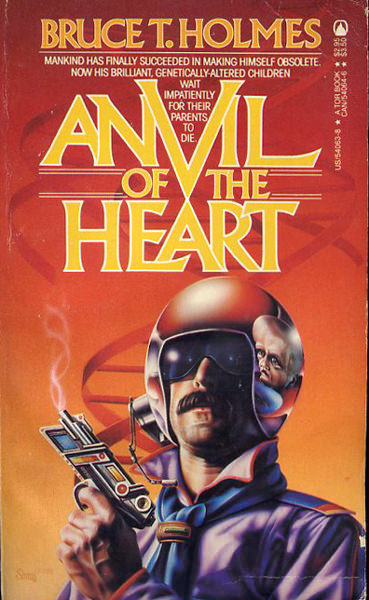 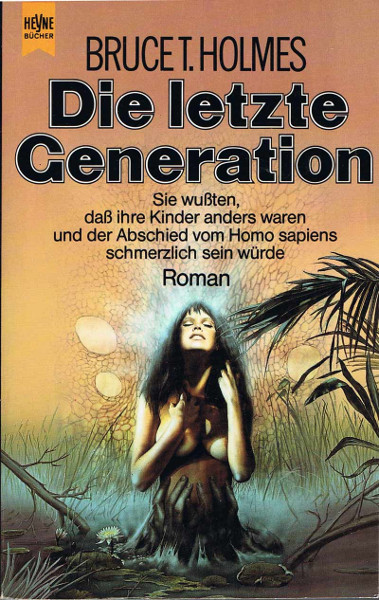 I found the author is still alive, and maintains a website. In his own words:

This is a science fiction novel of mine published in 1984. For one brief and oh-so-ephemeral moment that summer it led the Nebula Nominations for best novel, then got left in the dust. It also made the Locus recommended list for that year and was a Prometheus Nominee. It was translated into German and Japanese.

To show that we're thinking of the same book, here are some quotes from the first chapter (which is available on Mr. Holmes's website). The viewpoint character in this chapter is John, that common man you mentioned. (Although he changes a great deal in the course of the plot.)

Turning down the corridor to his apartment he suddenly froze, a clammy breath tingling at the back of his neck. There at his feet lay a body in the silver boots and purple jumpsuit of a police trooper.

John fought down the rising panic which urged him to run. Running would do no good. His wrist droid was constantly relaying his position to Op. From this moment on, he and the body before him were forever linked in the computer's indifferent tracings. Blood pounding in his ears, John stepped gingerly over the body to get a better look. Yes, it was murder. He could see the ends of a thin wire leaving the neck in back and attached to short dowels. Garroted. For a moment John knelt beside the body, fascinated by the bulging, purple face before him. He had never seen a dead man before. Then his fear returned. What would he do if he were innocent? He'd call Op and report it. Maybe then they'd believe he didn't do it. John fumbled hurriedly with his droid.

"Op, I've found the body of a police trooper. He's been murdered. Could you report my position and let someone know?" His voice had been high and nervous. That would be filed with the report, such and such deviation from standard voice print. You could never get around the computer. Maybe here that would help. If Op could just read the truth in his voice.

The first chapter (and much of the rest of the book) is set in the city "New Chicago," and "Op" is the name of that central AI you were talking about which monitors practically everything that happens within the city.

At the end of this chapter, after the "troopers" (cops, but very nasty ones) have taken John into custody on suspicion, we have a passage that tells us about the modern generation of genetically-altered children, as seen through John's eyes. (He is a husband and father.)

John spent the five minute flight to the Information Service Center loathing what was to come. The sergeant had said he'd face a director, one of the new people. While John knew he'd be safer there than with the troopers, he could smell the sweat of his fear. Those cat eyes and the bulging head-in the full grown the effect was hideous. Why was it that human deformity was such a uniquely stomach wrenching sight? And how could he be so bigoted as to still see the new people as deformed?

He had thought raising the children would help. How could anyone not love their own flesh and blood? But it hadn't helped. Too much had been changed. He could not love those eyes. They were somehow evil, and strange, and unspeakably wrong. His skin crawled when he touched his little girl. With the boy it was much worse. He hated the boy. Hated the child's contempt. The boy was four now, already much more intelligent than John and each day leaving him further behind. Whenever the boy talked to his younger sister it was in Basic, neatly freezing John out of the conversation.

The old shame returned. Two years back John had attempted to learn Basic. The process had become all the more impossible when his son had decided to help. The boy's impatience and disbelief constituting the most humiliating experience of John's life. Yet he must never let anyone see how he felt about the children. One word from the boy, and Fran and he would be out in the suburbs. Still, something inside him screamed for release. He'd heard recently of a parent who had killed her own child. John understood how it could happen. It was not a good time to be alive.

"New people" is the name preferred by the genetically engineered people for describing themselves. Elsewhere in the book, they are called by less polite names, such as "pumpkin heads" (because their big round heads are so large, seeming way out of proportion to the rest of their bodies). The new people tend to regard us of the "old race" as dumb animals to be tamed or culled, etc. This prompts rebellious tendencies in many men and woman, and I can confirm that the rebels are called "Renegades" in the text. As you suggested, this explains why the German translation was "Renegaten."

LC, referred to by the Renegades as "she," is the friendly AI for the Renegades in the vicinity of New Chicago. During the big battle at the climax of the book, LC tries to attack Op at the cyberwarfare level, but loses -- and is stated to have been destroyed. However, Op is defeated in the end by a commando-style raid (John is a key member of it) that blows up the hardware that hosts Op's software.