Where does Thor get his hammer when he's not using it?

Does anyone know where Thor gets his hammer when he's not using it? The sky? A storage place in Asgard?

He can store Mjolnir anywhere he wants, it has an enchantment on it that means only those who are deemed worthy can lift it. If you are deemed worthy, it is highly unlikely you would try and steal it. In reality, he will obviously keep it close to hand so if he needs it in a hurry it won't take long to get to him.

This means he'll likely store it in his bedroom or an armoury nearby when on Asgard and similar in the Avengers HQ on Earth.

We do have at least 1 canonical example of him storing Mjolnir somewhere and that appears in Thor: The Dark World when he hangs it on a coat hook when entering an apartment.

If we consider the Team Thor mockumentary short films as canon then he stores it in his bedside table draw all tucked up. 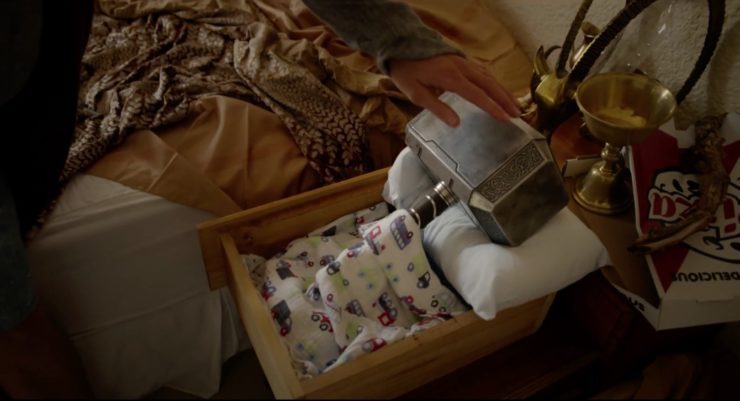 During the same film we see Mjolnir around the apartment in various locations, such as the kitchen counter top so, as previously said, he just leaves it wherever he wants to really; it's not like anyone else can move it.

Of course though in reality he almost always has it with him and so doesn't need to store it anywhere. It's just something he takes with him when he goes out and about.

27
How does Thor get back to Earth, again?
14
How can The Accursed One deflect Thor's Hammer?
6
You can't wield Mjolnir unless you're worthy, but has anyone ever stopped Thor from wielding it?
9
If Thor does not hold Mjolnir, but he is worthy, does he possess the power of Thor?
3
What is the force that enables Mjolnir to return to the hand of Thor
56
Was Mjolnir ever used for building something?