Searching for video game like Xevious but with more interesting bosses

I am trying to find an arcade game that I saw in the 1980s that made a strong impression on my with the innovative appearance of its bosses. It was a top-scrolling shoot-'em-up,

I saw it somewhere in the range of 1985 to 1989 (most likely in 1986), at Skate Palace in Salem, Oregon. Seen from a distance, at first I thought it was Xevious, as I remember it having a similar color scheme (with lots of greens and earth tones), and I saw a player defeat a boss that looked a lot like the Andor Genesis mother ship bosses from Xevious. 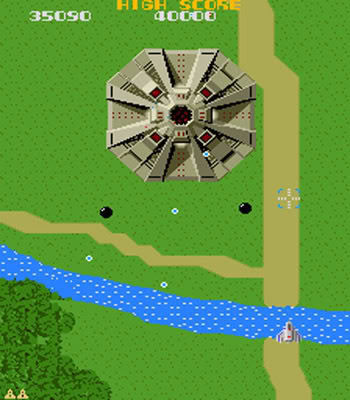 As I remember it, the boss had a similar shape, square but with cut corners to make it an octogon. However, it may also have had an extended arm attached, unlike the Xevious boss shown above. It also shot more interesting looking missles, shaped like boomerangs, unlike the small and large spheres in Xevious.

The first boss down, the player I was watching made it through another stage, to face off against another monster alien craft, which was the one that really caught my attention. It was like a gigantic silver or gray metal insect. I remember it as being closest to a grasshopper or locust, but it might have a different bug. Moreover, it shot interesting missiles as well, little metal fists (extending back a bit past the wrist) that shot forward, propelled by rocket flames. I think the player died against his enemy, and I did not see any more.

Later, as I got to know Xevious better (and had multiple friends who actually made it all the way through that game), I recognized that this had not, in fact been the same game. Over the years, I have actually played quite a few (mostly emulated, through the MAME library—which I have looked over, albeit nonsystematically) Xevious-style arcade games in an effort to find this one again. However, thinking about it now, this was probably not the right approach. There are plenty of "Xevious clones" out there, but what distinguished them from other vertical shoot-'em-ups was that they had both turrets for firing at enemies in the air and bombs for hitting the ground. In fact, there is no reason to believe that the game I saw had Xevious's innovative bombing feature; I probably just associated what I was seeing with Xevious because of its similar graphics style and color palette.

Thanks to DavidW, I have found the game I was thinking of. (I will be awarding DavidW a bounty for finding the correct series of games.) The Gaming History page for UFO Robo Dangar pointed me toward other similar games made by Nichibutsu. Just watching UFO Robo Dangar, I noticed similarities to MagMax (the barriers on the ground that block the player's normal shots; the ability to upgrade the player's ship with the body of an anime robot; the holes leading down to different-looking play areas; and a number of extremely similar enemy designs). However, looking at other Nichibutsu games quickly found me the correct answer.

The game I was thinking of was Terra Cresta, from the same series of games as UFO Robo Dangar.

The bosses I remembered are shown in this longplay here

When I saw that boss shooting fists propelled by flaming jets, I knew this was the game I was thinking of. (My impression that the boss was insectoid must have been confusion with another game.) After the boss's arms are destroyed, it shoots boomerang-shaped projectiles, which I also (imperfectly) remembered.

As I was tracking down the game I had seen, it was interesting to see the stylistic continuity among the games, which were, at a superficial level, aping the style of Xevious. Yet Terra Cresta, MagMax, UFO Robo Dangar, and the later game Terra Force had a number of stylistic commonalities that were original to the series.

I wonder if this could be the 1986 game UFO Robo Dangar. I've never heard of it before, but ran across it while searching for another game.

It seems to hit most of your points. The first boss is somewhat octagonal in shape: 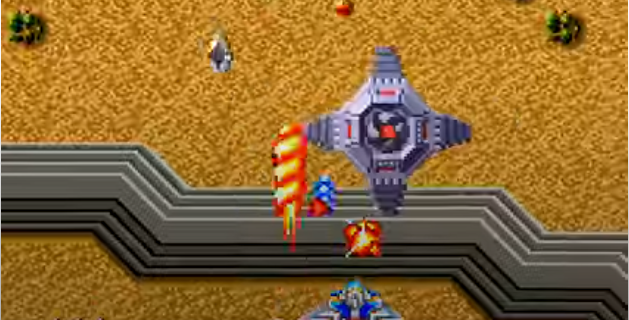 I'm not sure what shoots what, but there are a variety of non-ball weapons shot at the player, including some that might be described as boomerang-shaped:

The second boss is silvery and insectile:

The player doesn't have separate shots for air and ground - the same shots hit both targets. There are also a variety of player shots; blue balls, flame-like clouds (both in these screen caps) plus a few other, like big expanding waves...

There's a longplay video on YouTube you can check out for more details.

I am adding a second, separate answer here, because I have located a different source for one part of what I was asking about in the original question. Most of what I remembered came from Terra Cresta, which I located thanks to DavidW's answer. However, this boss was completely missing:

It was like a gigantic silver or gray metal insect. I remember it as being closest to a grasshopper or locust, but it might have a different bug.

I was watching an old arcade game playthrough during my workout this afternoon, and I spotted the boss that I was trying to describe, in the game Alpha Mission.

(The video is from the quaintly named Japanese release of the game, ASO: Armored Scrum Object.)

As you can see, the boss is more of a giant robot scorpion than insect, but as soon as I saw it, I knew that was what I had been trying, imperfectly, to remember. I am not sure how I got it conflated with the rocket-fist-shooting boss from Terra Cresta, but thirty-five-year-old memories can be like that.

14
Short story about an immersive video game with a fantasy dungeon crawl theme
8
Anime movie: kid is so good at VR game that government tries to recruit him
9
Seeking a game like Hunt the Wumpus but with graphics, RPG elements, and a balrog
7
Arcade Game with network-like enemy
11
Space-themed MS-DOS game with top-down perspective, crumbling bridge, and ghost-like aliens
45
90's PC game, similar to "Another World" but in 3D, dark, purple, locked inside a prison
5
VR PvP game with space-like physics