Where is Helen Magnus' sanctuary located?

Anyone know in what rough area the primary sanctuary location - Helen's sanctuary - is located? I know they've always kept it somewhat vague and not really said specifically. But the destroyed bridge, and the general feel always made me think that it was sort of in the south-Brooklyn area of NYC. I always got the feeling that it was sort of like Gotham City ... some fictional take on New York City.

That was until I started watching season four. The first episode, when Helen goes back in time and is working with Holmes in London, she and he are in that central, round room with all the monitors (sans the monitors of course). So that would seem to be a pretty clear indication that it is in London.

Of course, that would seem to be disproven by the fact that most of the characters (original Source Blood Group aside) all speak with a North American accent, lending back towards the "Gotham City" style.

Any clues or ideas?

The Sanctuary we know most well is in an area ambiguously called "Old City".

There's a skyline view of Old City at the end of the first season, in Revelations, Part II: 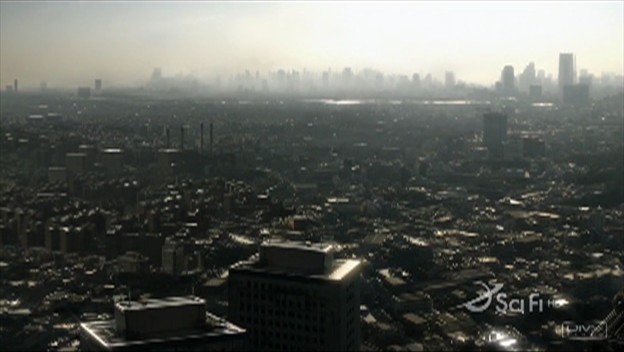 According to the Old City link above, that view is from Vancouver, British Columbia, Canada. Which seems to make sense as (at least the first season) was filmed in Burnaby, British Columbia.

However, while watching the series, I also got the impression that it was supposed to be someplace in New York, although I couldn't say why - I've never been there.

EDIT: As for the design of the large room mentioned in the question, there's an offhand mention from Magnus in the first episode with her father: She built it off of his designs. So it's identical (or, nearly identical) to the one in London in the past. 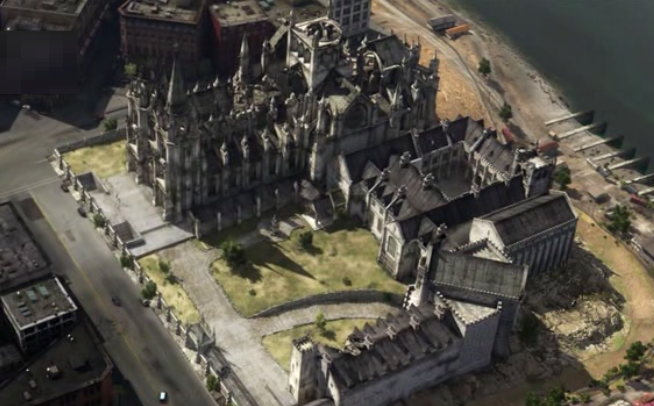 Helen Magnus founded the Old City Sanctuary some time after her ill-fated voyage to America aboard the Titanic in 1912, to serve as her main base of operations. James Watson was left in charge of the original Sanctuary in London.

The Old City Sanctuary housed many Abnormal inhabitants and staffers, and served as a refuge from the dangers of Old City and the rest of hostile world. Old City is not a real city. It is a visual effects construct which resembles a real urban metropolis, seen below. The precise location of Old City was never clearly marked on a map, but you could think of it like you would Gotham City or Metropolis, a fictional city with no recognizable landmarks, keeping set production costs low and locations nondescript. 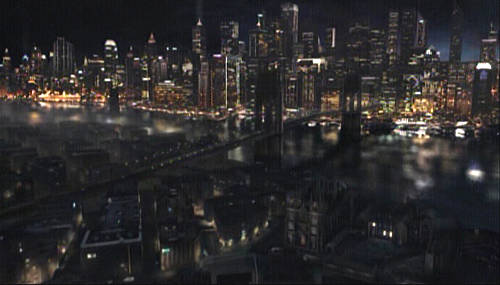 The Old City Sanctuary was completely destroyed during an invasion from the underground mutant insurgents led by Caleb. Magnus initiated the self-destruction to prevent the Sanctuary from falling into Caleb's hands and to fake her death, allowing her to retreat to the new highly-advanced Sanctuary housed completely underground.

In season 2, ep. 12 "Kali" there is a 'map zoom',(at about 19 min, 12sec.) roughly to the Pacific NW, before opening on a scene in said "Sanctuary" so British Columbia seems right from that perspective.

At first I got a San Fransisco vibe but then realised the nameless unknown city was part of the shows mystic, but then I realised too that they mention Sanctuary's in major cities all over the world except Canada so the Old City Sanctuary must be in Canada somewhere and because its filmed in Canada I figured BC. Even though it is a made up city I believe it be in BC near Vancouver area.

In views from Old City across the river to New City, there is a building with diamond-shaped lights and a slanted roof. This is a building in Chicago. Also, the fact that the FBI is shown to have jurisdiction in seasons 3 & 4 indicates the US, probably in a northern state.

I have a problem with the British Columbia answer, because at the end of season 1, Ashley and Henry make a reference to electricity "above the border in Canada." So the Sanctuary is located in the US somewhere. I agree that it seems to be somewhere in the West coast, because both the New York and London sanctuaries are mentioned several other times. My idea is that it's somewhere around LA, because it never seems to snow and doesn't seem to get cold.

Since the Sanctuary Series was filmed mainly in Vancouver BC, the actors and scenes will be mostly Canadian, but the series itself is based on information indicating that Magnus' Sanctuary is/was in New York City.

They can't be filming in a building in NY if they are filming in BC so the building has to be in Canada, or a total figment of the imagination projected at the right time in the filming.

It is possible to have a mock up made (see architects) and photographed then inserted into the filmed tape. The interior can be totally built on a lot (see other movie industry locations). So the building itself may or may not exist. If it does exist I hope someone stumbles upon it and shares the location with us. I have since had confirmation that it does not exist and was a mock up used strategically in the series.

It's not the same building, obviously, but at 455 Central Park West, there's a house that always reminds me of Sanctuary HQ. I guess it's my North-East-ness but I always felt the Sanctuary base was in NYC. Check out the building when you can and see what I mean.

Not the answer you're looking for? Browse other questions tagged real-location sanctuary or ask your own question.

5
Why is Helen Magnus' Father Still Alive?
4
What would happen if Helen Magnus gave a normal human a blood transfusion?
15
Where does Orphan Black take place?
35
Where is Godric's Hollow?
1
Why was Ashley Magnus written out of Sanctuary?
1
Where was the castle in Heaven Sent?
15
Where is the napalm falling?
19
Where is Metropolis?
2
Where is Crescent Moon Bay?
11
Where is the ruin in District 13 in The Hunger Games Mockingjay Part I located in real life?