Inspired by Searching for video game like Xevious but with more interesting bosses, I'm resuming my search for a video game I played once or twice sometime around 1990, at an arcade in Salisbury Beach, Massachusetts. I made a strong effort to track down this game 10-15 years ago without success.

The graphics were very reminiscent of Time Pilot '84, and like that game it was all-direction scrolling shooter.

You piloted a small spaceship and were trying to destroy a large thing, either a base, or a large ship or creature (I think it had a somewhat organic look). The base or whatever was flying or hovering over the ground, which may have been a barren moonscape, but I might be mixing that up with another game.

The interesting thing was that the 'base' or whatever was sort of a 'network', consisting of nodes branching to other nodes. Some of these were just worth points while others were weapons that fired at you. If you managed to fly in 'deep' (your ship was 'higher' than the base thing) you could destroy a parent node and all the child nodes would explode too.

I believe there were also flying enemies that attacked you while you tried to do this. I don't remember whether your ship had more than a single weapon - there may or may not have been another weapon used against the 'nodes' rather than the flying enemies, like Xevious or Time Pilot '84.

It does have some similarities to games like Boskonian or Last Mission.

Second attempt at identifying this game.

You not only have to fight airborne enemies, but also ground targets, which are bombed with the aid of a crosshair …

In each stage you fly over an elaborate orbital installation, with lots of buildings and connecting joints. The targets each time are the power pods, which provide the station with energy. Cutting off a section’s power supplies causes the whole area to break down, which makes it a lot safer to traverse as the local anti-air turrets blow up with it. Only after destroying the allotted number of pods it becomes safe to take on the central core ... 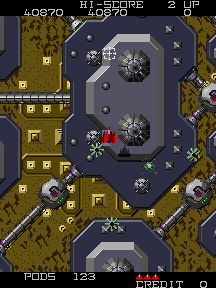 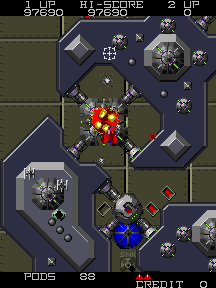 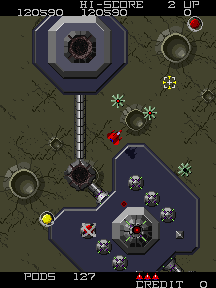 You can see the ground in last image is very moonscapey.

You had to fly around in a spaceship and destroy enemy bases. These bases had a core and six linked canons. The canons could be destroyed separately to the bases they were linked to. 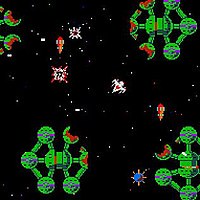 According to Wikipedia, the game was released in 1981. 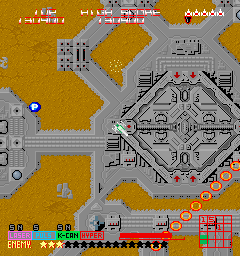 28
Novel set on a generational ship with a unique "chess"-like game
7
Kids story, probably late 80's/early 90's: boy plays arcade game that is actually a test by aliens
6
Searching for video game like Xevious but with more interesting bosses
4
Game identification: flying shooter on PC from early 2000s
45
90's PC game, similar to "Another World" but in 3D, dark, purple, locked inside a prison
5
VR PvP game with space-like physics
5
Sidescrolling puzzle video game on Steam where you can be dismembered and bring yourself back to normal, required to solve puzzles
11
NES Game Identification: Top down, green/jungle on cover and maybe title screen