Read in late 1960's, early 1970's. Fiction about 2 teenage girls raised with dolphins who could breathe under water. Brother (or uncle/guardian) brought them on land, to teach about being human.

This sounds like it is Daughters of the Dolphin (1968) by Roy Meyers. It is the second book in the Dolphin series. I can't find a summary of the book but Amazon has a few images, one of the front cover and one of the back cover showing the blurb.

From the age of two, Sir John Averill had lived in the sea, where kindly dolphins raised him to manhood.

Known to a few humans as Triton, the dolphin man could never become fully accustomed to living on land and fled away to his underwater home whenever the need impelled him.

But here he could not live either. For now that he had known man and the ways of man he needed more than the companionship of dolphins.

Now at last there were two creatures like himself - if only he could keep them alive long enough to grow up! 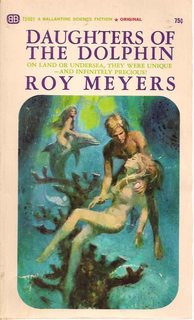 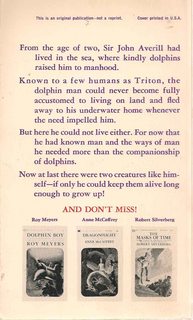 There is a review in Science Fiction Review, November 1968 by Bill Glass which is available online here. It's not very positive for the book though so I'll leave it for you to check out. The following excerpt seems somewhat relevant though:

Oh wow, the damn fool thing ends with the introduction of two untrammeled children of the sea (Synclare and Vinca Phelan - Ghod, has that Myers got a flair for names) to the world of men. Boom. End. I just can't wait for the next thirty year slice of life in the seas.

The girls appear to be introduced very late on in the book so it's possible this is the third and final book in the series instead, Destiny and the Dolphins (1969). However, I can find even less online about this book. 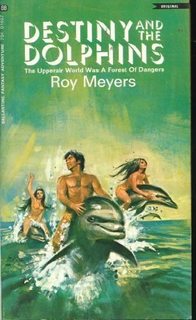 I found this by using isfdb's advanced title search searching for books containing dolphin in the title and then looking through for relevant results. Daughters of the Dolphin immediately caught my eye but it's very difficult to find anything relevant online about it. The OP's comment stating they may have found it and it being the same though was enough for me to post this answer.

The correct answer is almost certainly Daughters of the Dolphin, as indicated by TheLethalCarrot. However, the question is so terse that it could potentially also be another book, An Island Called Moreau, by Brian W. Aldiss. The story is a sequel to H. G. Wells' classic science fiction/body horror novel, The Island of Doctor Moreau, about a mad scientist who tried to form animals into humans.

The book does, however, have human girls that live with dolphins. They have partial dolphin bodies that allow them to swim efficiently, and the plot does involve some efforts by the male protagonist to bring the dolphin girls into human society.

A sequel, of course, to H. G. Wells' The Island of Dr. Moreau—set on the same Pacific isle where that mad doctor surgically transformed animals into human shapes. Now it's 1996, and, in the midst of global war, a space shuttle crashes in the Pacific, and Undersecretary of State Cal Roberts finds himself washed up on Moreau Island—where a new mad doctor is up to similar tricks. His name is Dart—or "the Master"—and he is a 1960s thalidomide baby grown up, equipped with elaborate metal limbs to compensate for his deformities. And Dart, a Haydn-loving gent who claims to be more victim than monster, has been experimenting with "the relativity of flesh"—using drugs to change the fetus in the womb, producing the grotesquely varied half-animal/half-human creatures who populate the island and tremble in fear of "the Master." Narrator Cal is horrified by all this, of course, especially when he learns that Dart's experiments are being surreptitiously supported by the State Department (Dart has created a species of gnomes that is radiation-resistant). And--after an uprising of the animals, brushes with death, and a guilt-free sexual idyll with a family of half-seals—Cal finds that all his values (including belief in God) have been thrown into question. By turns amusing and genuinely creepy: a slight, unsubtle, but neatly told tale that should also send readers back to the splendid Wells original.

2
Triton book series
1
Book, probably published before the 1980s, about a pair of teenage girls (twins?) raised by dolphins and slowly integrating into society

18
60s-70s science-fiction novel about interstellar agent with artificial hand
4
A book about a boy searching for his missing father, the spaceship navigator
1
Book, probably published before the 1980s, about a pair of teenage girls (twins?) raised by dolphins and slowly integrating into society
6
1960s SF novel with sub war, telepathy, dolphins, recreational drug that makes you sick, then cures you for fun
4
Need help identifying novel about water planet with mams, moonsteeds, mermaids, and singing
13
Young adult book about 5 girls with superpowers
12
Identifying a particular science fiction novel
8
Science fiction short story anthology - Yero
5
Trying to identify a novel that features communication with dolphins