In episode 3 of The Mandalorian, it is said that Mandalorians never remove their helmets for any reason. Really? Not even to sleep or bathe? Is there any canonical source for this idea? I’m going to assume that the “never” implies “Never removes their helmets in public…” right?

But in flashback scenes to the Mandalorian’s childhood, nobody is really pictured wearing Mandalorian armor let alone helmets. They simply seemed like basic humans who might just be unified by wearing maroon wardrobes all the time.

So what is the deal with this claim? What is the canonical context of the claim?

In episode 4, we see him take his helmet off to eat. This is after a villager asks him about removing it. It also clarifies that they do remove their helmets when nobody else is around.

OMERA: When did you last take that helmet off?

OMERA: I mean in front of other people

Episode 8 furthers this when

IG11 removes the helmet to tend to Mando's injuries. Mando protests that no living thing has seen him without it since he took the oath, to which IG11 reminds him IG11 not alive.

The direct answer is Yes they do remove their helmets per previous visualizations of Mandalorians. Although in The Mandalorian they haven't doffed their helmets, nor fully explained why just yet.

It has been proven in previous shows, and even in The Mandalorian that they used to walk around without helmets on, or even armor for the most part.

In Star Wars Rebels (2014-2018), Sabine Wren is mostly seen without her helmet on, as are most of the Mandalorians in the show.

In Star Wars: The Clone Wars (2008) there are episodes involving the Siege of Mandalore. Although in this instance most of the Mandalorians are wearing their armor and helmets, there is a scene where Anakin is shown talking to a Mandalorian female without her helmet on. There are other scenes throughout the pretty long series depicting Manadlorians without their helmets on.

It is also assumed that Mandalorians at some point have to doff their armor and helmet in order to eat, bathe, etc. I think it is a general understanding that they only do that in the privacy of their homes and with people they trust their lives with.

Also due to the flashbacks of Din Djarin, you can conclude that wearing the armor at all times was not a custom before. I imagine we will get more information on this throughout the season.

Update: As you have probably seen in the latest episode, they DO in fact remove their helmets. Although we did not see the protagonists face, his helmet was off.

Apparently Deathwatch/Children of the Watch Mandalorians follow the creed of always wearing the helmet all the time- this is referenced to in the third episode of season 2 "Chapter 11: The Heiress" where Bo-Katan Kryze, and two other mandalorians remove their helmets, much to Din Djarin's shock. Its mentioned that the Watch are religious zealots.

So some mandalorians, who follow the specific creed adopted by the Death Watch do not remove their helmets. As per other media, other factions of Mandalorians, including pre-purge deathwatch may not.

I think there’s a certain amount of context. Or as Obi Wan would say: “From a certain point of view.”

“Our world was shattered by the Empire with whom this coward shares tables.”

Then he tries to remove the protagonist’s helmet, which triggers the fight. Disrespect was meant and given out by that action. The helmet is clearly important and removal of it was meant to be symbolic.

“When one chooses to walk the way of the Mandalore, you are both hunter and prey.”

There’s a certain reputation to that armour, and considering the Empire apparently has them in hiding, even after they are gone, there’s obviously a certain risk to being seen as a Mandalorian.

“How can one be a coward if one chooses this way of life?”

Kinda backs it up. There’s a risk to being seen as a Mandalorian.

“Have you ever removed your helmet?”

In previous context — is almost like saying, “Have you ever denied being a Mandalorian?”

“Has it ever been removed by others?”

I suspect this doesn’t mean they live in their helmets — and considering the response “This is the way…” and how that immediately stopped the fight — I suspect there was some cultural and religious implications there.

While I’ve yet to watch the episode in question, this recap on io9 seems to confirm that the protagonist does remove his helmet to eat:

“Mando hasn’t taken off his helmet in front of people since he was a kid, but (as many people wondered after the comments last week) he does take it off to eat if he’s alone.”

I’ve already accepted an answer that does a nice job of summarizing Mandalorian mythos and customs throughout the series, but episode 4 of The Mandalorian (“Sanctuary”) explains it very well in one simple scene:

After coming to a local village on the planet Sorgan, he meets the villagers — including Omera — who asks the same obvious question about the helmet and this exchange occurs:

Omera: “Do you mind if I ask you something?”

Omera: “How long has it been since you’ve taken that off?”

Omera: “I mean in front of someone else?”

Din Djarinn: (While looking at the children playing outside.) “I wasn’t much older than they are.”

Omera: “You haven’t shown your face to anyone since you were a kid?”

Din Djarin “No. I was happy that they took me in. My parents were killed and the Mandalorians took care of me.”

Din Djarin “This is the way.”

Omera: “Let us know if there’s anything you need.”

She the leaves and we see Din Djarin sitting down at a table near a window with a plate of food; he has taken his helmet off and is watching the children play outside.

And to further clarify things, episode 8 of The Mandalorian (“ Redemption”) further explains the helmet thing in this scene with IG-11; no “living thing” can see a Mandalorian without their helmet on:

Din Djarin “Try it and I'll kill you. It is forbidden. No living thing has seen me without my helmet since I swore the Creed.”

And with that, Din Djarin removes his helmet so IG-11 can treat his wounds: 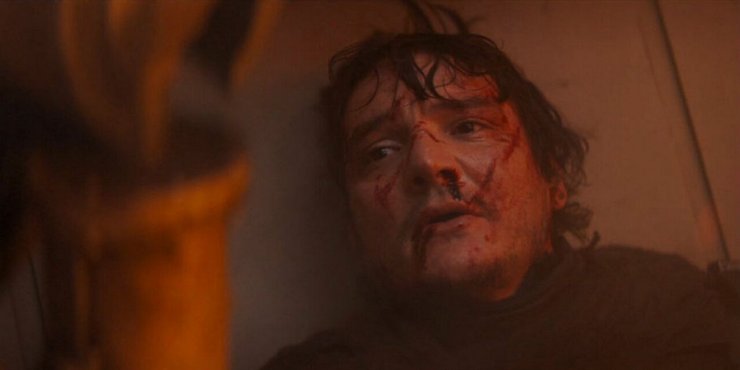 I don't know everything about the Mandalorians, but I can tell you that in the KOTOR 1 video game, you can meet and bring in your team one Mandalorian leader that is Canderous Ordo. He is not all the time in full armor. He is an interesting addition in the game.

But those stories happen a long time ago before the SW movies so maybe since the tradition of never removing their helmet happened.

Also, The Old Republic stories, despite having a good success (KOTOR 1 & 2 video game + Star Wars MMORPG "The Old Republic") don't seem to be "canon" (means not recognized officially by Disney who owns the licence nowadays). But I don't see how we can ignore so many years of published Star Wars content that made many Star Wars fans delight ! So I presume you can count on this helmess Mandalorian!

Not the answer you're looking for? Browse other questions tagged star-wars the-mandalorian mandalorian or ask your own question.

1
Why do clones remove their helmets if stormtroopers don't?
40
How do bounty hunter tracking fobs/beacons work in “The Mandalorian?”
56
Why is a living creature being frozen in carbonite in “The Mandalorian” so common when it seemed so risky in “The Empire Strikes Back?”
11
Did the terms of the bounty on Han Solo change between “Star Wars” (1977) and “The Empire Strikes Back” (1980)?
6
Why was Ran’s space station destroyed by the New Republic X-Wing attack team at the end of episode 6 of “The Mandalorian?”
15
Why is beskar so important for Mandalorians?
13
Why are the Jedi a mystery to the Mandalorians?
19
How does R2-D2 — or any astromech droid — routinely get into and out of a T-65 model X-Wing in the timeline of the original trilogy?