Is there power armour in Star Trek?

Has there ever been an example of a power armour in Star Trek? We know that some species like the Hirogen are wearing armour and for others, like the Klingon that like close combat, it might be useful. But I can't remember ever having seen a piece of power armour, where a power armour is a armoured and powered exoskeleton, i.e. rendering the weight of the armour insignificant and maybe even make the wearer stronger by supporting him.

And if not, has it ever been stated why they decided against power armour, even for species that wear armour or are warriors (like the Jem'Hadar / Klingons)?

I am aware that factions, like the borg, are using personal shields instead and that Starfleet has shields, see this question. But if some are using armour, why not power armour?

In many ways, The Borg have armor similar to what you describe. While it may not look like Ironman, or allow them to fly, all Borg units wear mechanical armor that enhances their performance (extra strength), shields them from harm (adaptation), and provides utilities needed to perform a variety of functions (like linking into computer systems, or injecting nano-probes into victims). Even though many aspects of their armor are biomechanically integrated directly into their bodies, the armor does appear to be powered from a source (as we see in First Contact when Picard disables a Borg drone by simply disconnecting a few wires from the back of its head), and intended as an enhancement rather than a replacement for faulty or damaged biological parts. These suits also include life-support to the Drones, as we see again in First Contact when the Borg go into space without any additional equipment that most humanoids would need to survive.

So to sum it all up: The Borg have armor which performs all the functions you listed, they just seem to have found a way to reduce it to not require an exoskeleton.

Power Armor does indeed exist in the Star Trek universe, but is rendered obsolete by more advanced technologies such as phasers, disruptors & personal shields.

During the DS9 episode "Business As Usual" (S05E18), Quark uses the holodeck as a showroom for his new weapons business. While demonstrating Breen weaponry to a customer, Quark programs the holodeck to simulate both an armored drone of some sort as well as a hostile alien in power armor - both are instantly vaporized by a single shot from the rifle. 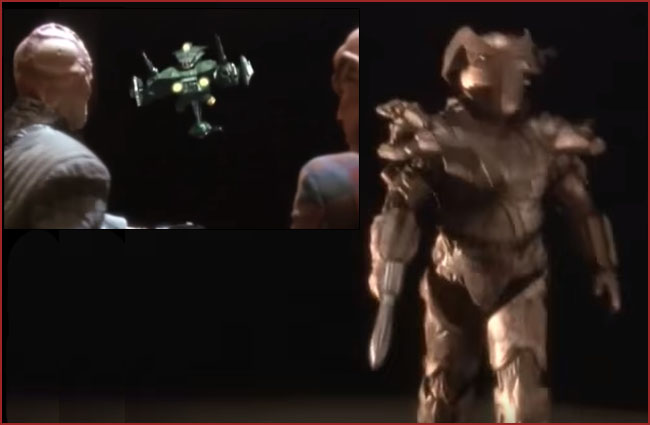 Klingon and Romulan disruptors have also been shown to instantly vaporize a target, whereas Federation phasers set even on standard can blow most items apart with a single, quick burst.

In short, there is no reason to wear clunky, slow power armor (which also requires constant maintenance) when much lighter weaponry renders it useless.

Not the answer you're looking for? Browse other questions tagged star-trek armor or ask your own question.

22
Why doesn't Starfleet have personal shields?

31
In Star Trek, what is the largest empire/power in the Milky Way Galaxy by sheer size?
24
How does cross-species (Klingon/Human, Vulcan/Human) breeding work genetically in Star Trek?
19
Are there in-universe explanations for how some species' appearances change between series?
9
Why don't the Borg use shields or a cloaking device?
7
What is the explanation or justification for this Vulcanesque Klingon name in Star Trek: Discovery?
5
Do Klingons Respect Human Warriors from Antiquity?
8
Which Star Trek species are not uniform?
8
Do non-human groups gender their ships?