How is Batman able to shock people that try to remove his cowl?

In the movie Batman: Hush, when Batman is hurt after falling and is unconscious then some goons try to remove his cowl they get electrocuted. How is Batman able to this? Does he store electricity in his batsuit?

Bonus question: If Alfred removes his mask, how can he disable the feature and not get shocked?

We see a very similar piece of tech in The Dark Knight. It is, apparently, powered by a 'device'. There's no indication what the power source is, but a taser doesn't need to have a big battery to be highly effective, probably there's a small rechargable battery built into one of the ears of his cowl that also powers the voice modulator and other gizmos built into the suit.

Over time the cowl's wiretapping capabilities were upgraded from short to long range. We also improved security. Originally four-part hidden snaps were used to protect my identity should I be knocked unconscious. I have since developed a device intended to produce an electrical shock, activated if anyone tried to remove the cowl externally.

Another similar piece of technology appeared post-Crisis, wired into the batsuit and explicitly labelled as a "taser". It's normally used as a melee weapon, but also defends the cowl. It's sewn into the suit, evidently along with the power source.

A “last resort” taser system is sewn into the outer layer of the Bat-suit atop an insulated internal lining. This one-shot defensive mechanism shocks up to 200,000 volts through a micro-thin electrode network dispersal over the entirety of Batmans costume. The taser is armed and fired via circuit-wafer controls in his gloves. 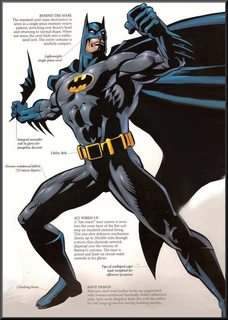 Since Alfred has direct knowledge of the suit, disabling the taser or removing the suit without triggering it would just be a case of not putting your hands onto the dangerous bits.

Not the answer you're looking for? Browse other questions tagged dc batman dc-animated-universe batman-hush or ask your own question.

10
How many people who weren't superheroes did Batman reveal his identity to?
12
Do people in Gotham know that Batman doesn't kill?
13
Is Alfred the moral conscience of Bruce Wayne/Batman?
16
How does Bruce Wayne justify his Batman expenses?
7
How was Batman able to find out the strengths & weaknesses of the members of JLA?
5
How did Batman know Zatanna wiped his memory?