Are there indications of a loss of past historical records in Star Trek universe?

I can vaguely remember several hints in various Star Trek episodes of one (or more?) turmoils in the past of the series universe, during which historical records were lost. This does not seem to affect periods that are common in the series and the real universe (e.g. it is clear that memories from World War 2 or the Apollo program survive), but it mostly has to do with records of either these turmoil periods themselves, or other periods in-between our (real) present and the series present & past, at least until the Federation was established.

The focus of the question is not the turmoils themselves, but the resulting loss of historical records, if any.

The question is inspired from the discussion in the comments of a recent thread, where a consensus does not seem to emerge.

KIRK: Then you can check the registry.

SPOCK: No such vessel listed. Records of that period are fragmentary, however. The mid-1990s was the era of your last so-called World War.

SPOCK: Of course. Your attempt to improve the race through selective breeding.

Yes, there was a facility called Memory Alpha that took a big hit... 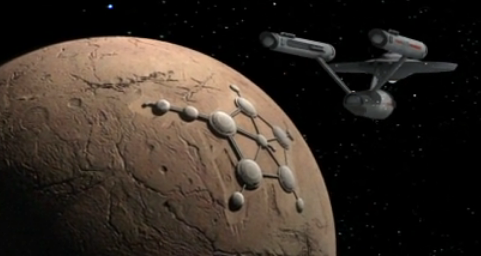 This occurred in the Original Series episode "The Lights of Zetar". Netflix Amazon

KIRK: Lieutenant, try and warn Memory Alpha of the proximity of that phenomena. Give me an ETA for its possible impact.

CHEKOV: I cannot, sir. It has the ability to change speed.

UHURA: Sir, I'm unable to establish contact with the planetoid. I'm hailing on all frequencies. No response.

SPOCK: It is of little consequence, Captain. Memory Alpha has no protective shields.

SPOCK: None, Captain. When the library complex was assembled, shielding was considered inappropriate to its totally academic purpose. Since the information on the Memory planet is available to everyone, special protection was deemed unnecessary.

KIRK: Wonderful. I hope the storm is aware of that rationale.

MCCOY: Somehow, I find transporting into the darkness unnerving.

KIRK: Scotty, can you get us some more light?

SCOTT: I'm afraid this light'll have to do, Captain. The generator is inoperative.

SPOCK: A disaster for the galaxy, Captain. The central brain is damaged. The memory core is burned out. The loss to the galaxy may be irretrievable.

The episode haunts my memories. And was a common topic of conversation amongst sysadmins, and was a real motivator to doing backups.

In Star Trek Discovery S02 E14 it is hinted that Discovery's existence is removed from Federation Records:

SPOCK: The destruction of Discovery was tragic but does in and of itself resolve the issue.

Even more radical steps must be taken to ensure that type of scenario never repeats itself.

Any residual trace or knowledge of Discovery's data, or the time suit, offers a foothold for those who might not see how critical, how deeply critical, that directive is.

Therefore, to insure the Federation never finds itself facing the same danger, all officers remaining with knowledge of these events must be ordered never to speak of Discovery, its spore drive, or her crew again.

Under penalty of treason.

SPOCK: 124 days have passed since your disappearance.

It has been difficult, but we've managed not to reveal the truth of Discovery's fate to Starfleet.

13
Why does Sisko say Kirk's Enterprise is the first one?