A story in which God (the Christian god) is replaced

This a story I read between 20 and 30 years ago. The protagonists are the supernatural powers in the Christian mythology: God, Death, Satan etc. I think somewhere at the beginning, a man is about to die: Death comes for him, but he shoots and kills Death - and becomes the new Death himself. Later on it turns out that God is, not dead, but unreachable - incommunicado or something like that, and the 'Powers' decide to replace him. For this, they all need to donate some of their greatest powers; I recall the Devil being reluctant to give his Curse.

I know this is vague - I wasn't good at noting down these things in my younger days. Does anybody recognise the story? I believe it was a novel.

This is On a Pale Horse by Piers Anthony, part of the Incarnations of Immortality series of books. The first book covers the hero's transformation into the incarnation of Death as a result of some inadvertent gunplay.

When Zane shoots Death, he has to take the job, speeding over the world riding Mortis, his pale horse/limo, measuring souls for the exact balance of Good and Evil, sending each to Heaven or Hell instead of Purgatory. The new Thanatos is superbly competent, ends pain when he ends lives. But Satan is forging a trap for Luna, the woman Death loves. 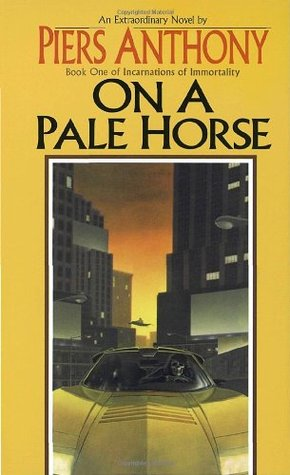 I think you're combining two books in the Incarnations of Immortality series by Piers Anthony. The first book, On a Pale Horse, does chronicle Zane taking over the mantle of Death after killing the previous incarnation, and it is mentioned that God is inaccessible, but it's the seventh book, And Eternity, that covers the replacement of God.

After an overwhelming succession of tragedies, life has finally, mercifully ended for Orlene, once-mortal daughter of Gaea.

Joined in Afterlife by Jolie -- her protector and the sometime consort of Satan himself -- together they seek out a third: Vita, a very contemporary mortal with troubles, attractions, and an unsettling moral code uniquely her own.

23
Short story about a girl who lost/replaced her personality
13
Story in which God is on the side of aliens invading earth
2
Which story describes this aircraft maneuver?