Does the "eleventh metal" exist in the post-Final Empire world?

I saw a table of all the metals and Atium was a God metal, not a normal metal with an opposite as it was in the first Mistborn novel. Also in that table they did not have Malatium, the eleventh metal. I would assume that Malatium still exists but now I'm not so sure. My final question is: does Malatium still exist?

Yes, Malatium "exists" in the sense that it is still a legitimate chemical compound in the world. However, it is not really accurate to call it "the eleventh metal". It is an alloy of Atium + Gold, and not properly part of the 16 true allomantic metals.

The diagram (which @daft_code already linked to, so I won't repeat it) from Brandon's site shows the chart of all 16 allomantic metals, plus the two "god" metals. From here, we can see a couple of things that the people in the initial series got wrong:

All of those misconceptions have presumably been corrected by the time of Alloy of Law.

As far as Malatium itself, it doesn't appear on the chart because it's an alloy of Atium, specifically Atium and Gold. Both Atium and Lerasium can form alloys with the other 16 metals. In the case of Lerasium, these alloys are what causes Mistings to be born in the first place (e.g. someone ingesting a Lerasium/Iron alloy would become an Iron Misting.)

In the case of Atium, we only know what Malatium does: it produces the Gold effect but on someone else. Note that this actually makes Atium/Malatium a much better fit for the positions held by Cadmium and Cerrobend, as "external" versions of Gold and Electrum, but Word of God(*) has declared that to be false.

We don't know what the other 15 alloys of Atium do, though they all have some enhanced "temporal or mental" effect. However, atium is very rare at this point: presumably, Sazed could produce more if he wanted, and Marsh still has a tiny stash (keeping him alive), but that's it.[1] As far as the rest of the world goes, it doesn't exist anymore. That makes it unlikely that we'll see any of these other alloys any time soon.

To add to deft_code's answer, the 11th metal is Malatium, which is an alloy of Atium and Gold.

As far as the existence of it, I would say technically yes. Brandon has hinted that there is still Atium in the world, so an alloy of it would still be possible.

There are 16 metals not counting the God metals. The characters in the original mistborn never really understood allomancy fully. So the concept of an 11th metal is based on a false premise (that there are only 10 metals).

As for malatium, I believe that each of the standard allomantic metals can be alloyed with atium. The chart says that combining larasium with any allomantic metal and burning it turns that person into a misting of that metal. I assume atium can be combined in a similar way, and that malatium is just one example. 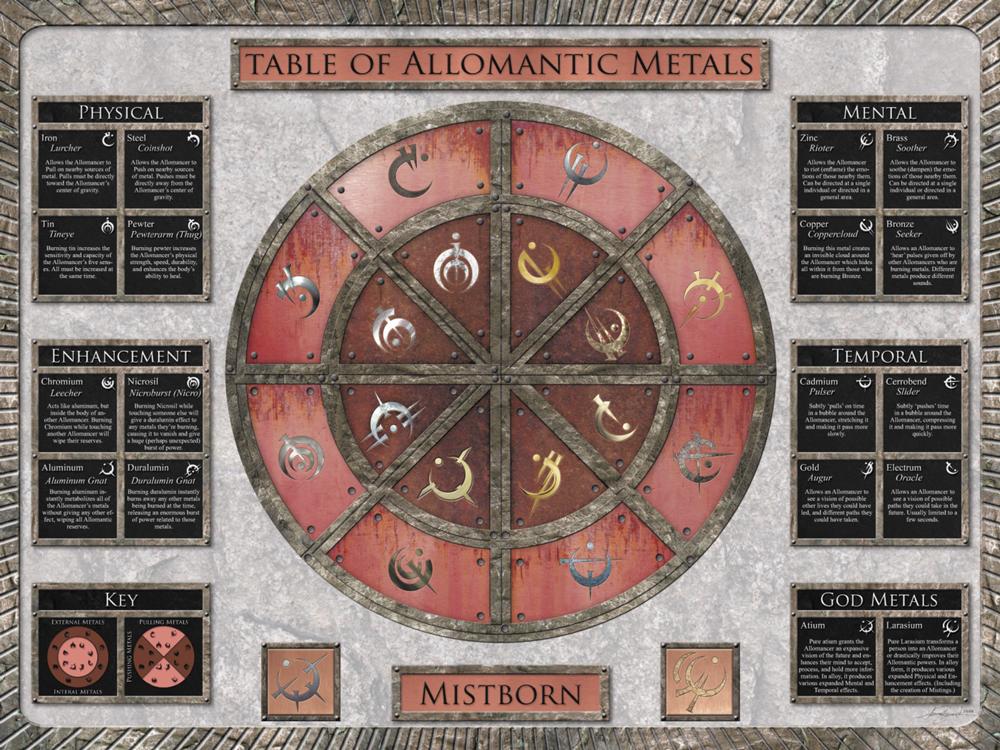 Not the answer you're looking for? Browse other questions tagged cosmere mistborn or ask your own question.

6
Where does Vin get her metal from?
3
How could a new metal appear on Scadrial?
8
Who can see Preservation?
2
Can cosmere magic powers be used on other planets?
5
Why does Marsh burn tin in the dark?
4
How does Steel Pushing & Iron Pulling work in Mistborn Series?
3
Does Metal have to be Hemalurgically charged for Ruin to control someone?
11
What happened to all Mistborn during/after the fall of the Final Empire?
1
Proposed method for killing a Steel Inquisitor?
5
Why can anyone burn Lerasium but not Atium?