Why are these characters dressed the same?

Adrien from Miraculous Ladybug and the Thirteenth Doctor are dressed almost exactly the same. Why? 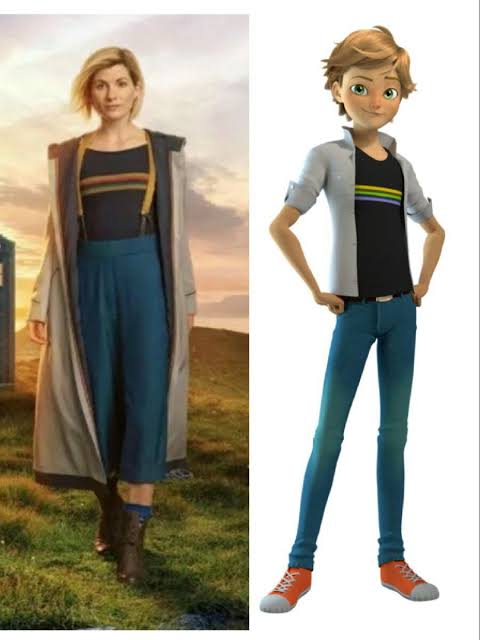 The (superficial) similarity between the two characters was noted by Thomas Astruc, creator of Miraculous: Tales of Ladybug, although the strong implication is that he was amused by the comparison rather than reaching for his phonebook to get his lawyer's number.

Thanks for the homage! We love your show too! <3
♯miraculousladybug 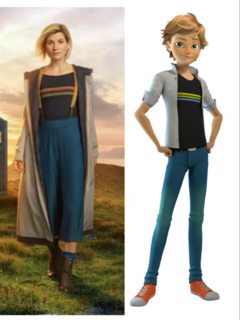 Note that the 'looks' are only superficially similar. Adrien is wearing a white shirt over black t-shirt with 5 (non-rainbow) stripes, blue denim jeans and generic orange sneakers. The Doctor, by comparison, is wearing teal three-quarter trousers with suspenders, brown boots, a navy blue t-shirt with nine (scarf-inspired) colours and a grey full length coat.

The creator of the Doctor Who outfit has given extensive interviews about the creative process that went into making her eclectic get-up.

Q2. What was your inspiration behind Jodie’s costume?

A: Jodie and I met in secret a few times. She had already been through the audition process and had time to think about what she would like to wear. She sent me a load of images and photos that she had collected that meant something to her, in particular one image of a woman in braces and trousers in a period that was hard to define. It was a black and white image and a great starting point. The next thing she said was that she likes colour and wanted to incorporate it into her Doctor costume. I went ‘gulp’ and starting looking for references.

Q3. What made you pick those colours on her costume?

A: The colour is inspired from a variety of sources, one of the first photos Jodie showed me was a Coldplay album cover which was cool. She loves Coldplay and their use of colour was lovely. We also wanted to reference the colours of the sky and space and so the rainbow and the blues came into focus very early on. And in true synchronicity it also referenced the colours from previous Doctor’s costumes but in a gentle way. The rainbow colours are all muted. So colour was important and each one means something including the coat lining and the lining of the sleeves.

Not the answer you're looking for? Browse other questions tagged doctor-who clothing miraculous-ladybug or ask your own question.

8
What are the limitations of Ladybug's "Lucky Charm"?
3
Does Adrien know Marinette’s secret identity?
3
Can Hawk Moth akumatize Miraculous holders while they’re transformed?
5
Why is the Butterfly Miraculous seemingly the most powerful?
6
Which element does each Miraculous correspond to?
2
Why are these Doctor Who regenerations the same in (classic) Who?
3
Is there an official Miraculous episode order?
1
How did "Hawk Moth" get his Kwamii in the first place?
2
What accounts for the political success of André Bourgeois?