What made the Tusken Raiders unable / unwilling to shoot down Luke's Landspeeder?

There is one shot in Star Wars: A New Hope where one Tusken Raider, from a high cliff on a rock mesa, aims at Luke's speeder that zips through a canyon below; then, a second Tusken Raider touches the sniper from behind and, after a brief argument in their barbaric tongue, seems to get in the final word and the nomads scurry over the rocky terrain.

The fact that Tusken Riders shoot down a fast racer during the Boonta Eve Classic in 32 BBY demonstrated that these sand people are skilled marksmen, thus, why, having a good overlooking from a high position, they didn't shoot down Luke's X-34 with their long ominous slugthrowers?

Here a picture of the miniature land speeder used (via chroma keying) for the shot mentioned in my question. I wanted to show this picture that shows (imho) the meaningfulness of this brief shot. 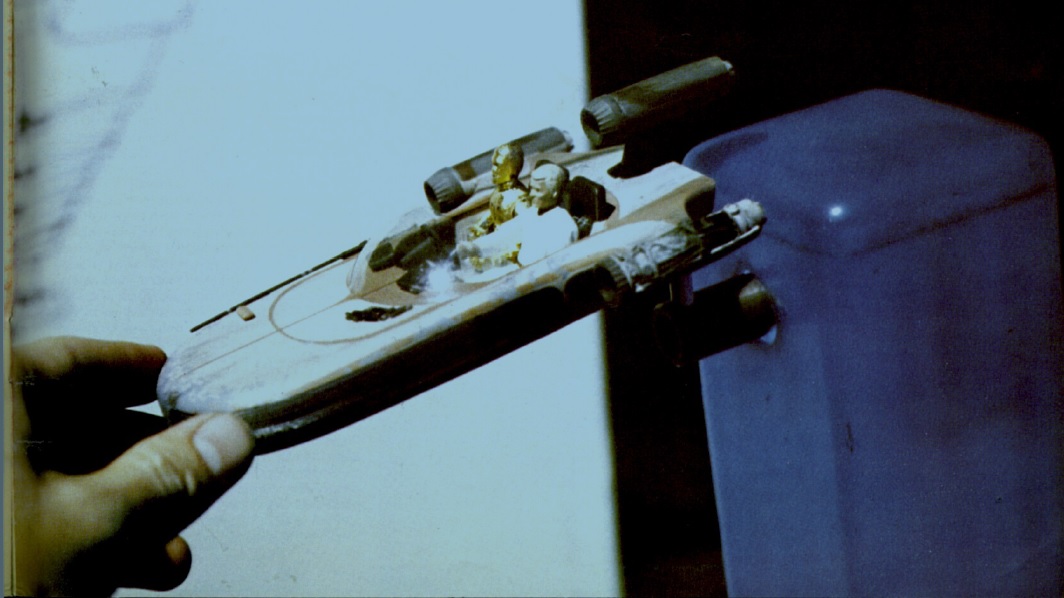 It is interesting to note what the Star Wars - A New Hope 4th revised script tells about the shot.

One of the marginally human creatures raises a long ominous slugthrowers and points it at the speeder but the second creature grabs the gun before it can be fired.

Thus, the second Tusken Raider didn’t touch the shoulder of his pal but grasped the gun before shooting.

The rifleman was, according to the short story Rites, acting on the orders of his chieftain. When it came time to take the shot, he counselled them against wasting it and scaring off their potential victim.

“Quiet!” A’Yark yanked at A’Koba’s robe—but it was not to accost him. He heard a moment later what the chieftain had heard: the sound of an approaching engine. The two hustled to a promontory where they saw a landspeeder, an infernal human machine, zooming into the valley below.

This is it! Raising his rifle, A’Koba drew a bead on the distant vehicle as it raced from left to right—only to withdraw when A’Yark touched his shoulder. The chieftain was correct about this, at least: The landspeeder was too far away, and if its occupants were coming for the droid, they would surely stop when they reached it.

Since they knew where they were going (based on the location of Artoo), they could afford to be less hasty and opt for an ambush instead. Note also that the Chieftain is worried about incurring the ire of a local wizard.

A’Koba regarded his cousin and raised his hands to the chieftain. “You see? Not your wizard. Come on.”

But A’Yark stood transfixed, trying to work it out. “A farm child and his droids, all the way out here—here? It does not augur well.”

A’Koba stared for a moment—then shrugged. He shook his head. “You disappoint me. Go down and remain with the banthas. We will bring the prizes to you.”

A’Yark responded with reluctance. “Go. Take. But do not kill, unless you must.”

A’Koba turned back to face his cousin—and together they started scaling the rise. A Tusken chief, scared of shadows and counseling mercy? Madness!

7
What are those lights close ahead of Luke's X-34 landspeeder?

41
Is that Luke's hand falling down at the end of The Empire Strikes Back?
16
Why couldn't Qui-Gon Jinn's Force ghost warn Yoda when Anakin killed the Tusken Raiders?
19
Why did the Tusken Raiders shoot at podracers?
35
In Star Wars Episode IV what made the moaning sound that scared the Sand People?
8
Why couldn't the Clone Gunship shoot down Count Dooku as he was escaping Geonosis?
5
What was Luke's job on the farm?
51
What do Luke and Han shoot in the detention block?
26
What does a Tusken Raider look like under the mask?
6
What is the nature of Luke's scanner used to track and find R2-D2?