Manga with a boy whose father was murdered (but is still around), living with a demon girl with magic hair

This one is on the tip of my tongue. It's a manga that I read online somewhere between 5-10 years ago. The main character is a high-school-age boy who comes home to find his father dead, I think either drained of life (leaving him skeletal) or with his head bashed in. There's also a girl with very long black hair. It transpires that she's a demon, albeit probably not the one who killed his father. I want to say that his father was a bit of a deadbeat, prone to gambling debts, so the boy was already used to being pretty self-sufficient. Also, the dad winds up possessing something, maybe a small animal, and therefore is still around, giving bad advice. Anyhow, the demon girl can turn her hair into various shapes, including using it as a weapon, and using it to form wings to fly. She's ignorant of a lot of aspects of human society, which means we get a lot of cute misunderstandings. I'm not certain if she's mute, but I think she talks very little.

I remember there being one episode where the boy is playing sports with his classmates in summertime, and the demon girl keeps showing up with hot drinks, hot snacks, etc, with mention being made that when it's hot, it's traditional among the Japanese to drink and eat hot things because it makes the body sweat more, which helps cool you. It turns out that she was trying to get a hot bath working at the house, so all of the snacks were her trying to use up all of the excess hot water. Another episode involved a self-mummified monk found in a temple who is brought back to life somehow. I think there was also a bumbling angel who opposed the demon girl. And there was a demon who very unconvincingly tried to disguise himself with a trenchcoat and a hat who deferred to the demon girl. I think that the series ended with the demon girl revealing her true nature, that she was the Devil herself, ruler of Hell, but that she wanted to stay with the boy. And I think he learned that she was responsible for the death of his father, but he forgave her for it.

Now that I mention that she was the Devil, I want to say she was named Lucy (as in Lucifer). I think the comic itself was entirely black-and-white, maybe with some shading, but little to no color.

Ah! Found it. The manga in question is Lucu Lucu (TV Tropes link) 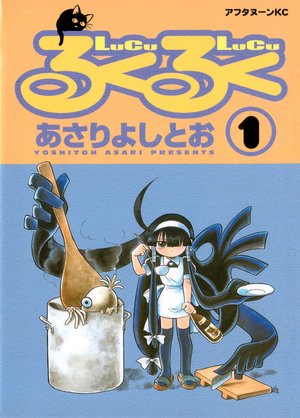 Lucu Lucu is a gag manga revolving around the daily life of Rokumon (first name) Suzuki (family name), Princess Lucuha and her demon pals (who are all squatters in Rokumon's home) including Bubu, a sort of Deadpan Snarker and comedic foil to Rokumon and Lucu. But wait, there's more! We also have Rokumon's father and the angels that come to Earth in order to find out the demons' plans. However, unlike normal demons, Lucu is different. She feels human emotions and has a sense of duty to care for Rokumon and others, which the angels always mistake for some sort of diabolical plot. Hilarity Ensues.

It's a cutesy and likable seinen manga, and it doesn't spare you of an Incredibly Lame Pun here or there, and the plot isn't necessarily the focus, rather the interaction of the characters with each other is highlighted in the first 40 chapters or so. Rokumon seems to be familiar with Lucu, and he has a difficulty remembering his childhood, a mystery presented in the story, and he only knows that it was absolutely horrible, since his mom is presumably dead, and his father was a drunkard who gambled most of his money away.

It also likes to make fun of religions. All religions.

I didn't get a chance to mine one of the Manga sites for references, but the TV Tropes page mentions her ultimate identity (and notes the additional pun of her main weapon being a morning star), the interfering angel, and that Rokumon's father is in the body of a cat. I was wrong about her being mute (and the first few pages are actually in color), although she still is usually fairly terse.

9
Book about a girl whose hair changes with the seasons
8
Girl with magic confronts a demon and heals tree
5
Book about a girl with magic and a boy a with curse
11
Book about a dinosaur loving boy accidentally summoning a cat-fearing devil
5
Webcomic from around 2014-16 about demons and pacts
5
Book about a girl with purple eyes whose father was a (prince?) alien from a different world
3
Manga with a girl who bonds with gods to fight other gods. She has long blonde hair and a gold helmet
11
Manga where a girl dies every time a boy falls in love with her
2
Manga/Manhwa/Manhua where the female lead is transported or transmigrated into to the body of a girl with white hair but changes it to blue
3
Manga about a demon king or villain, who wants revenge against the heroine, but is too weak, so he just stays with her and cleans her house