What is the nature of Luke's scanner used to track and find R2-D2?

In Star Wars: A New Hope, the next morning after R2-D2 got away on his "mission", Luke Skywalker and C-3PO (piloting the X-34 Landspeeder) headed off looking for the astromech until they track and find him using a scanning device.

After doing some research about this device, I have found that it has been referred as a scanner, metal scanner and built-in metal detector.

According to the script, it appears that it was a device embedded in the dashboard of Luke's Landspeeder.

“Wait a minute,” he advised Threepio as he stared fixedly at the instrument panel. “There’s something dead ahead on the metal scanner. Can’t distinguish outlines at this distance, but judging by size alone, it could be our wandering ’droid. Hit it.”

Unfortunately, after looking at the information contained in the Star Wars: Complete Vehicles: Incredible Cross-Sections of the Spaceships and Craft from the Star Wars Galaxy book by DK, there is no such scanner described in the book.

Also in the script, Luke takes a small control box from his utility belt to find the droids but in the Star Wars canon and legends the first appearance of a portable scanner (potentially able to detect droids) was in Star Wars: Episode V - The Empire Strikes Back.

For the aforementioned, I ask, what is the nature of the device that permitted Luke to track and find R2-D2? 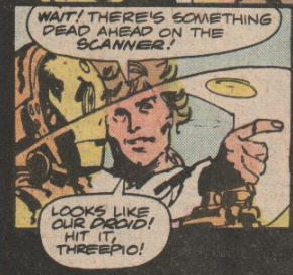 In order to have a visualization of the distance between the Lars homestead and the jundland wastes where Luke and C-3PO found R2-D2, here a map of Tatooine (Wookieepedia) showing R2-D2’s escape route from Lars homestead.

Making a roughly estimation of 16 hours between sunset and dawn in Tatooine, assuming that R2 was fully charged when he left Luke's garage and that he moved at 1.4 m/s (aprox. half his max speed), the distance he traveled was around 80.0 kilometers; matching the map distance. Thus, or the scanner was very powerful or Luke and C-3PO, thinking that R2 would seek for Ben Kenobi, headed straight towards the desert wastelands and with a low-power scanner they were able to find the astromech. 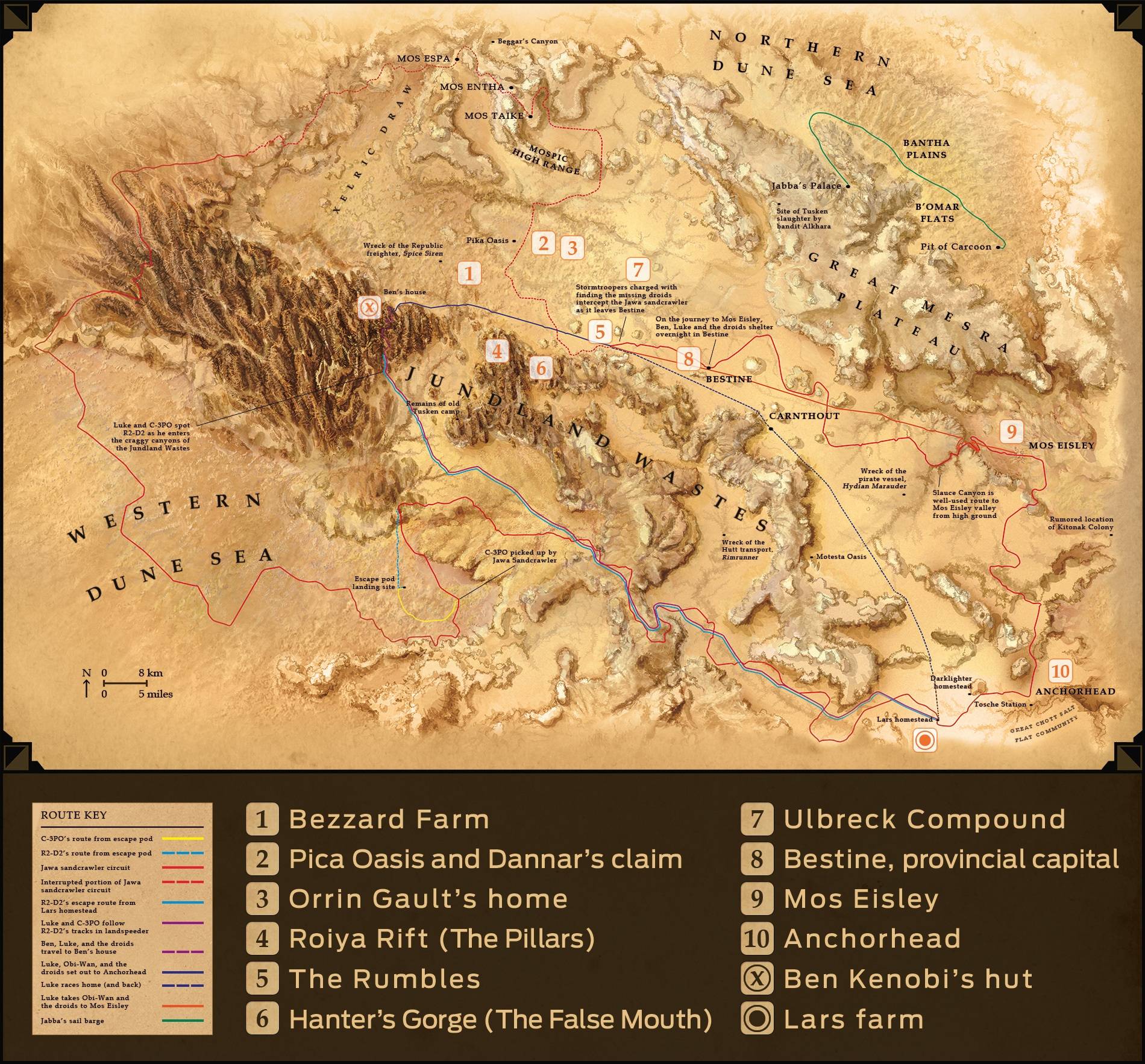 The novelisation refers to it as a Metal Scanner. Apparently it scans for metal.

“There’s something dead ahead on the metal scanner. Can’t distinguish outlines at this distance, but judging by size alone, it could be our wandering ’droid. Hit it.”

We learn in the junior novelisation that it's built into the landspeeder and automatically detects metal but not lifeforms.

Luke checked the autoscan on the dashboard’s scopes. “Look,” he said, “there’s a droid on the scanner. Dead ahead. Might be our little Artoo unit. Hit the accelerator.”

Unfortunately, the landspeeder’s autoscan failed to detect the presence of Sand People.

The Official Star Wars Fact File #54 gives us some additional info about the dashboard scanner including its various functions.

A multi functional display screen was mounted in the centre of the landspeeder's console, just forward of the thrust lever. In its basic mode, the screen gave read outs on engine temperature, ground speed and fuel capacity, but it could also operate as a short-range terrain scanner capable of detecting metallic objects, such as other vehicles or wayward droids.

The New Essential Guide to Vehicles and Vessels factbook backs up that it's a multi-function device.

A rudimentary onboard computer-and-scanner system provides navigational aid. These scanners can be configured to detect life-forms, obstacles, or even a runaway astromech droid.

8
Why did Luke leave his landspeeder when Sandpeople were coming?
3
Why were R2-D2 and C3P0 being used by Rebels?
22
Who gave the order to kill Owen and Beru Lars?
39
Why did Luke leave Owen and Beru's remains?
12
Does any explanation exist clarifying what happened to the escape pod R2-D2 and C-3PO used at the beginning of the first “Star Wars” film?
57
Did Luke really not know about Mos Eisley spaceport in the original “Star Wars” (1977) film?
13
Which droid lost a part that was discovered by Davin Felth on Tatooine?
4
How did the stormtroopers know which Jawas captured the droids?
6
What is the Physical Distance Between Mos Espa and Mos Eisley?