The movie might be from the 80's. I only remember (barely) some few scenes of the beginning. It's located in a wasteland, a guy on a motorcycle who wears a helmet decorated as an eagle comes to a place where other guys on motorbikes play some kind of Polo with a human head or skull.

I suspect this is The Last Border 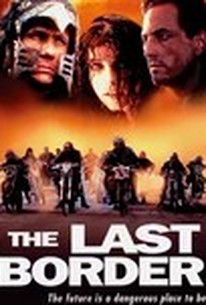 Note the eagle helmet at the upper left.

It is the year 2009, and civilization has almost perished on the planet, choked to death by pollution. The only place it survives is in the frigid far north. There, the few survivors are governed by a harsh military government, and dissenters quickly find themselves rounded up by the murderous Duke (Jurgen Prochnow). The picture opens as Jake (Jolyon Baker), a captive of Duke's, manages to escape. He helps rescue a peddler (Matti Pellonpaa) from the aftereffects of a motorcycle accident, and in gratitude the merchant helps Jake get free of his handcuffs. Another escapee is an amnesiac but capable woman (Fanny Bastien), who becomes a romantic partner of sorts, as they almost inadvertently manage to bring down the murderous enforcer.

The Duke is the character with the eagle helmet.

Found with a search for post apocalyptic film eagle helmet

83
Movie with magical book showing events of any day in history, except missing days of the Gregorian calendar change
9
Sci-fi movie identification - men fight in futuristic chairs and get zapped to death
1
3D animated film with flying motorbike racer and aliens in mech-suits
6
French sci-fi movie from the 1970s, space scenes filmed underwater
6
80s/90s zombie(?) movie with a "stolen record" of a shower scene
21
80s sci fi film with quest to replace lost female droid companion
6
Time travel back to stop a man to commit a disaster
5
80s cartoon fantasy movie with hero that has 3 heads