The last time I saw that anime I was a kid, so sorry if I'm gonna make some stuff up, I gonna try my best to remember it.

So in the first season, I remember that the story somehow started with a pretty young dude that had a gem that summoned some sort of knight with a spear drill and yellow tint to everything. He was really similar to Orion (from Brawlhalla). I can't remember more except that there were people that used magic too...

The series follows Lok Lambert as he uncovers the secret legacy of his missing father. His father, Eathon, was a member of the Huntik Foundation and a part of a secret world of magic users known as Seekers and creatures known as Titans. On his mission to uncover what happened to his father, Lok is joined by Dante Vale, Sophie Casterwill, Zhalia Moon, and a talking Titan called Cherit.4

It involves summons using a necklace (an amulet) and stones, and other people use magic. While most of the summons seem to wield swords, some of them do wield spears, and most of them wear yellow armor. Here is an image of Overlos, the Legendary Titan of Immortality: 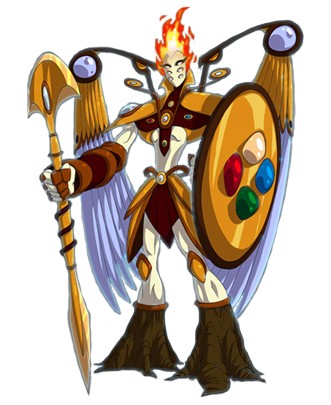 I don't see one that's specifically a "drill spear", but there are some funky looking ones. You can see a chart of the summons here. This video shows several of the summons, and the process of summoning them:

Not the answer you're looking for? Browse other questions tagged story-identification magic anime cartoon or ask your own question.

10
Anime with a boy hiring a creature from a stone, meets a man named Dante and starts a journey to collect crystals

7
What anime has a character becoming aware of cows suffering when eating a burger?
6
Movie about a man and a worm inside his head
2
Anime about guy with a unique robotic arm
3
Female anime character with powers and an amulet on her chest
2
I'm looking for an old anime transported featuring stones with power and people who can summon beings to fight with
10
Anime/cartoon where gray men chase a homeless girl
2
Japanese anime/animated movie where the girl is the key to a world of destruction?