What are the earliest instances of a virus causing large-scale mutations?

The Resident Evil series of movies and video games regularly features grotesque monsters created from the exposure of humans and animals to the T-virus/G-virus/C-virus.

Obviously the way this is portrayed is unrealistic, with a mad scientist injecting themselves with a vial and immediately turning into a monster, but I'm curious about how far back this kind of thing goes in fiction. I know of examples in superhero comics.

I know real-life experiments with inserting DNA into cells via viruses were happening as far back as '72, and viral gene therapy is an ongoing area of research, but I'm curious as to whether or not fictional instances of viruses mutating people precede these instances of real-life research.

The prototype for these kinds of stories is probably Dr. Jekyll and Mr. Hyde, with a 'serum' that transforms a man, but I'm more interested in explicitly monstrous transformations brought on by a virus.

EDIT: There have been some really interesting answers, but nothing that was quite exactly what I had in mind, so I'll try to narrow my question.

I know that at least in Japanese superhero media, there is at least one instance of what I'm thinking of: In the Super Sentai series Liveman, one of the villains injects himself with a virus of his own creation to become more powerful. 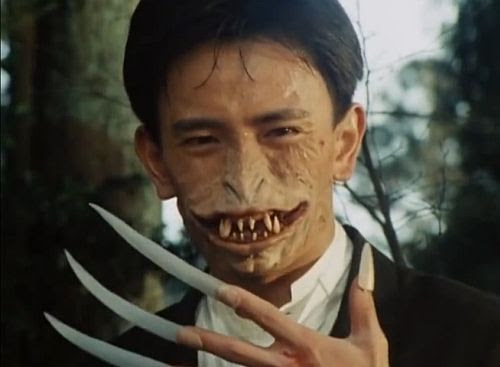 I'm not sure how much of an influence this would have had on the developers of Resident Evil, but I suspect that if there was one instance of this, there were more that I'm unaware of.

So to narrow the question down some: were there any instances of viruses mutating people in monstrous ways that would have been accessible to, and may have influenced, the developers of Resident Evil?

I will put forward the April 1938 "Hyperpilosity" by L. Sprague de Camp.

In the Great Change of 1971, a virus infects humanity that causes everyone to grow fur all over their bodies. Initial reaction to the plague, dubbed "hyperpilosity" by the news media, is one of panic and horror. Various examples of the troubles resulting are told; the cast of the latest Tarzan movie, for instance, is reduced to frequent all-over shaving to be able to continue filming. There is a run on depilatory products. An immense financial reward is offered to whoever can identify the condition's cause and develop a cure. Against the playing out of plague-fueled societal crisis and change, protagonist Pat Weiss relates how he and his employer, virology professor Oliveira, strive and ultimately succeed in doing just this. Alas for their dreams of riches; by the time their work is complete, mankind has become accustomed to the new state of things and moved on; those who end up profiting are not the scientists but purveyors of currycombs and such.

Growing hair all over isn't terribly monstrous, but it is a significant change. Short Story where a Flu (cold?) virus causes humanity to regain fur was my question seeking the name of this story, having read it as a child.

The Colour Out of Space is a 1927 story by H.P. Lovecraft where a meteorite crashes into a small town. The presence of the alien particles poison crops and cause animals and people to descend into madness. It isn't explicitly stated to be a virus infecting people, but a strange colour emanates from a well infecting people. Described as "that alien and undimensioned rainbow of cryptic poison from the well."(Goodreads)

This story inspired The Tommyknockers by Stephen King in 1987. An alien spaceship is discovered in rural Maine and "the spacecraft begins to release an invisible gas into the atmosphere that gradually transforms people into beings similar to the aliens who populated the ship." (Wikipedia)

There are many more examples throughout pop culture listed under Viral Transformation on TV Tropes.

If you're looking for a more monstrous transformation, Richard Matheson's I Am Legend, written in 1954, features a pandemic of bacterial origin (technically not viral, admittedly) that is transforming people into vampires.

Robert Neville appears to be the sole survivor of a pandemic that has killed most of the human population and turned the remainder into "vampires" that largely conform to their stereotypes in fiction and folklore: they are blood-sucking, pale-skinned, and nocturnal, though otherwise indistinguishable from normal humans. Implicitly set in Los Angeles, the novel details Neville's life in the months and eventually years after the outbreak as he attempts to comprehend, research, and possibly cure the disease. Swarms of vampires surround his house nightly and try to find ways to get inside, which includes the females exposing themselves and his vampire neighbor relentlessly shouting for him to come out. Neville survives by barricading himself inside his house every night; he is further protected by the traditional vampire repellents of garlic, mirrors, and crucifixes. Weekly dust storms ravage the city, and during the day, when the vampires are inactive, Neville drives around to search them out in order to kill them with wooden stakes (since they seem impervious to his guns' bullets) and to scavenge for supplies. Neville's past is occasionally revealed through flashbacks; the disease claimed his daughter, whose body the government forced him to burn, as well as his wife, whose body he secretly buried but then had to kill after she rose from the dead as a vampire.

After bouts of depression and alcoholism, Neville finally determines there must be some scientific reasons behind the vampires' origins, behaviors, and aversions, so he sets out to investigate. He obtains books and other research materials from a library and through gradual research discovers the root of the disease is probably a Bacillus strain of bacteria capable of infecting both deceased and living hosts. His experiments with microscopes also reveal that the bacteria are deadly sensitive to garlic and sunlight. One day, a stray, injured dog finds its way to his street, filling Neville with amazed joy. Desperate for company, Neville painstakingly earns the nervous dog's trust with food and brings it into the home. Despite his efforts, the sickly dog dies a week later, and Neville, robbed of all hope, resignedly returns to learning more about the vampires.

Not the answer you're looking for? Browse other questions tagged history-of mutant virus or ask your own question.