Has there ever been a red Twi'lek who wasn't a Dark Jedi or a Twi'lek Dark Jedi who was not red?

Throughout several works of Star Wars media, I have seen red Twi'leks who are Dark Jedi, but I don't think I've ever seen a red Twi'lek who wasn't a Dark Jedi. So my question is 2 fold:

If the answer to both is no, then is it because Twi'leks turn red when using the Dark Side of the Force, or is it just a coincidence (in-universe anyways).

Both canon and Legends accepted.

Red Twi'leks are of the Lathan race, one of the rarest subspecies of Twi'lek with red skin. 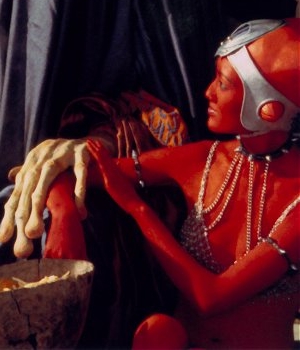 In Episode I, one of the slave Twi'leks attending the Boonta Eve Classic is a red Twi'lek and she's just a slave girl called Shakka.

In the legacy game Star Wars: Jedi Knight: Dark Forces II there's a Dark Jedi Twi'lek called Boc Aseca and he's not red, he's got pale skin instead. In addition, any ordinary blue, green or purple Twi'lek could fall to the dark side and that wouldn't magically turn their skin colour red.

The reason so many of the Twi'lek Sith are red-skinned Lathan is simply because it looks visually impressive, out of universe. It's the "Darth Maul looks cool!" factor.

8
Is there any background to this depiction of the Imperial Crest on Empire Day?
20
In canon, has a Jedi ever used the light side to kill a Sith?
29
Why did the Jedi turn totally Light side?
13
Has any other Dark Jedi or Sith said that they felt the “pull to the light”?
8
How much official communication was there between the Senate and the Jedi Council?
5
Are there any canon or Legends truly 'Grey' Jedi?
2
Are the color-changing eyes a sign that happens temporarily when someone first accepts the Dark Side?