I am looking for manga I read but have lost touch with. It was about this guy who used a red scarf that when activated used a sort of roulette wheel to determine its form (e.g., it could be a sword). He used it in a game that he used his phone to enter.

In the first couple of chapters the guy finds out his grandfather made a game and had died but before he died he set up a trial for him to protect a tomb from the tomb raider who after raiding a tomb gets the master of the tomb as a weapon.

This is The Silver Guardian (銀之守墓人, 銀の墓守り), a Chinese web manhua by Ling Meng and Ming Xung.

The main character, Shu Yin, is wearing a red scarf in almost all scenes I have seen. 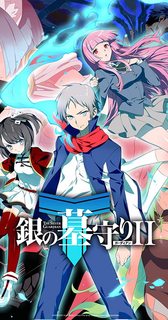 In Chapter 2, Page 3 there is a scene where an older man is speaking to what appears to be a young Shu Yin and he says:

So are you interested in grandpa's new video game idea?

And again in Chapter 5, Page 2 an elderly man appears out from a tomb and says:

Do you like what your grandpa has prepared for you?

More scenes from when Shu Yin was a child talking to his grandfather are from Chapter 8, Page 6 - 9, where his grandfather accidentally rips the scarf and offers feathers to Shu Yin for it to be mended.

And finally in Chapter 8, Page 12 there is a scene where Shu Yin's scarf activates and he flies off.

The description alludes to the fact he is the last Gravekeeper, and keeping the treasure safe from raiders:

...he expects to defeat the boss enemy to win, right? Alas, it turns out he's the last Gravekeeper and he's supposed to protect the treasure against the Tomb Raiders.

The summary has the following points:

7
Book where swimming skill is feared due to shapeshifting water monsters that can take human form
55
Comicbook short story where a man inherits a clock that tells when you die
33
Old science fiction novel about a man of the near future awakening from suspended animation to find himself in a technophobic theocracy
7
Anime where the guy has gems on his arm that indicates his power level?
4
Manga where the hero's party is dead. The MC bring their dead corpses as zombie of some sort back to the town