I don't remember when I read this. At least 20 years ago but maybe more. Nor the length. Probably not a very short short story but whether a novelette or a full length novel I have no idea.

It was at the same time SF and fantasy, because the only thing I remember is that one of the characters, while in a spacesuit in the vacuum (SF!) was able use his "phantom-hand" (Fantasy!).

I think that at some point he had lost an arm and developed this strange telekinetic power which he interpreted as a "ghost arm". Later he was grafted an artificial arm, but retained his telekinetic power as a "third" arm that could penetrate matter and for instance wipe his sweat from his brow while in his space suit. I don't remember anything more, alas.

I bet this is Gil the ARM, protagonist of a series of short stories by Larry Niven, collected as Flatlander (1995). 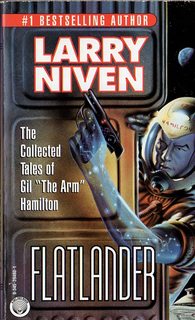 Gil, who works for a law enforcement organization known as ARM, lost his arm in an accident, and before he received a transplant, his latent esper talent manifested the symptoms of a phantom limb as an actual psychic appendage he could use. (Note that the new arm was a transplant, not a prosthetic.)

You may be remembering a reminiscence in "Death by Ecstasy" where he describes learning to use and live with his "imaginary arm":

I found I could reach through a cabin wall to feel for breaks in the circuits behind it. In vacuum I could brush dust from the outside of my faceplate.

At one point he is tied up and smokes a cigarette by grasping it in his "hand." Later in the same scene he reaches inside his captor's chest, feeling the surgical scars on the way in, and grabs his heart to stop it.

The only other story where Gil wears a spacesuit is The Patchwork Girl where he's solving a murder on the Moon. In this story he uses his "hand" to "feel" a hologram of a real moonscape, sifting through a pool of dust to see if anything is hidden there. (His imagination limits his esper talent to the shape and reach of an arm, but it is capable of analyzing something by "feel" that is not actually present as long as it appears to be "in reach.") 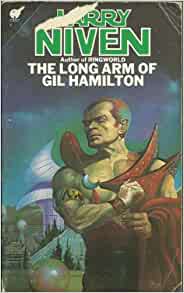 Flatlander is a 1995 collection of stories by American writer Larry Niven, all set in Known Space. It is the definitive collection of all stories by Niven about ARM agent Gil Hamilton. Many of the stories revolve around the theme of involuntary organ transplantation.

The book includes the stories Death by Ecstasy (formerly The Organleggers), The Defenseless Dead, ARM, The Patchwork Girl, and "The Woman in Del Rey Crater"—the only previously unpublished story in the collection.

The collection is essentially a replacement for a 1976 collection called The Long ARM of Gil Hamilton which contained only the first three stories. The Patchwork Girl was also published alone as a novel in 1986

9
Identify a story about a detective with a psychic hand

9
TV series about a man living in a mansion with a ghost
13
Cartoon movie where the main character had a robotic arm
4
Looking for title of SciFi book, main character has 3 spots on his arm
16
fantasy book/trilogy where magic-using character has swarm of bees as a familiar
3
scifi/fantasy story where main character lives many lives
18
Fantasy Story about The Phantom Tollbooth/Where the Wild Things Are Kids as Adults
7
Kindle book about a woman who helps remove ghosts from houses
15
Fantasy series - Character has epiphany on mountain
15
Seeking magazine short story c. 1950-1965 about man entering region of artificially distorted space on spaceship and deforming whilst in it