A short story (possibility written in the 80's), where humans visit an alien race that evolves fast?

I was from a wikipedia article. Humans discover a primitive race of aliens that are very small, whose sense of time is much more accelerated. Communication with the aliens can take hours for humans, but lifetimes for the aliens. The aliens see the humans as gods.

As the alien goes on with their progression in history, they reach a point where their technology is more advanced than humans.

I think the story is based on snapshot POV's of historical figures in the alien's history.

This is almost definitely Dragon's Egg by Robert L. Forward; the primitive (very briefly) race are the cheela and they live on the surface of a neutron star. 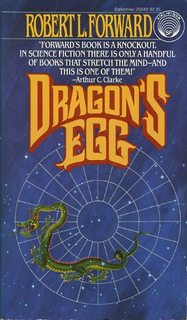 The cheela - who are described as the size of a sesame seed - live approximately a million times faster than humans, with a lifespan (for us) of about 40 minutes. From the human point of view the story takes place over just a few weeks as the cheela advance from hunter-gatherers to a galactic-civilization and then, somehow, leave. In exchange for the information that the human expedition transmitted that kick-started their civilization they leave a copy of everything they learned, but encoded so that humanity can only access bits of it at a time.

12
Tiny lifeforms on planetoid that live at accelerated time rate
6
Book about a small world which wants to communicate with a large one (humans?) on different time scales

10
Lizard Men from Space Invade Earth
11
Interstellar humanity enslaved by lizard like aliens
33
Short story where humans on a colony ship from Earth are overtaken by advanced Earthlings?
14
Scifi short story. Alien makes first-contact with humanity but finds us overly obsessed with sex
12
Aliens attack earth. Alien commander sues for peace after super-powerful 2nd alien race tries to blow up the sun?
33
Old story where aliens sell humans some machines to heal anything, and then disappear with their loot before we realize we've been scammed
10
Story based in the future where magic is facilitated by microscopic computers
19
Story about a first contact with alien race via radio signals