I encountered this book maybe twice when I was very young, maybe 8-9 years old. I remember very few details, but I'd be happy if I could find it again after all these years and get closure. You see, as a kid, the book was scary to me, and I think I was frightened by it. It would be pretty neat to see what I had been scared of.

The book opened with a boy (teenager, maybe?) floating in the air with a laser (or a bunch of lasers) removing all of his skin; he later wakes in a bed with sheets and has a dialogue with his father (maybe?); he learns his father removed his skin as a kind of punishment.

I don't believe I read any further, I was too creeped out from the outset. I don't remember any specific details about the book, such as cover art or size, but I believe the book was probably geared towards young adults. I also believe the book genre was sci-fi (I was big on sci-fi as a kid). This is likely also reflected in the cover art (knowing me, I probably first picked it up because of its sci-fi look).

I don't have the book with me and it's been a long time since I read any of it, so I can't check whether the skin removal occurs in the first chapter or is described as as a punishment, but the book Mutation, #5 in the Remnants series by K.A. Applegate, (published 2002,) includes a skinless boy named Kubric as a character who is pictured on the cover: 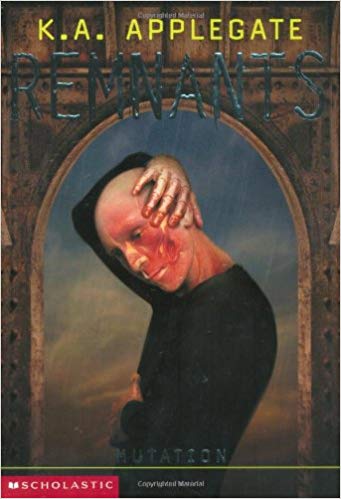 7
Teens stranded in eco-system within alien ship, fighting for survival

18
Fantasy novel about kid who finds out the 'evil warlock' is his father?
16
What novel was set in a dystopian future and featured a boy searching for his missing father?
4
Name of a fantasy or sci-fi graphic novel about a boy in a coma
6
Young adult sci-fi novel where main character undergoes bone surgery
6
Mysterious genetically enhanced genius children
8
70s (or earlier) pulp Sci Fi book with a Conan-type character and enemies shaped like asparagus