On what grounds was Hugo Strange able to have Bruce Wayne arrested in Arkham City?

This always kind of confused me, as i don't recall a reason being given for what Bruce was locked up for in Batman: Arkham City? The only thing shown is him trying to urge Gotham to have Arkham City closed, and then the Tyger guards arrest him.

What was his crime?

At this point in Batman: Arkham City, the mayor of Gotham is Quincy Sharp. Sharp was manipulated by Hugo Strange, the current warden of Arkham City, who helped him win the election. In exchange, Sharp basically allowed Strange to do whatever he wanted, helped by a generous amount of mind control. As seen here:

SHARP: Strange came to me back at the asylum. He told me he had friends, powerful friends. The sort of people who could make things happen. All I had to do was turn a blind eye to his experiments, and work on my campaign. He said his friends would ensure that I won.

BATMAN: Who are they?

SHARP: I have no idea. I never met them. They funded everything. Money was no problem. All I had to do was set up Arkham City and put Strange in charge. It made perfect sense. The scum of Gotham needed to be punished. It would be my legacy.

BATMAN: Strange has been removing anyone with evidence against him and sending them into Arkham City. Enjoy your legacy.

Not only that, Mayor Sharp has declared martial law, as detailed in the Arkham City comic miniseries, which means that all the usual protections against unjustified arrest are irrelevant. In particular, he's given the TYGER guards authorization kill people (and, presumably, to detain them arbitrarily). 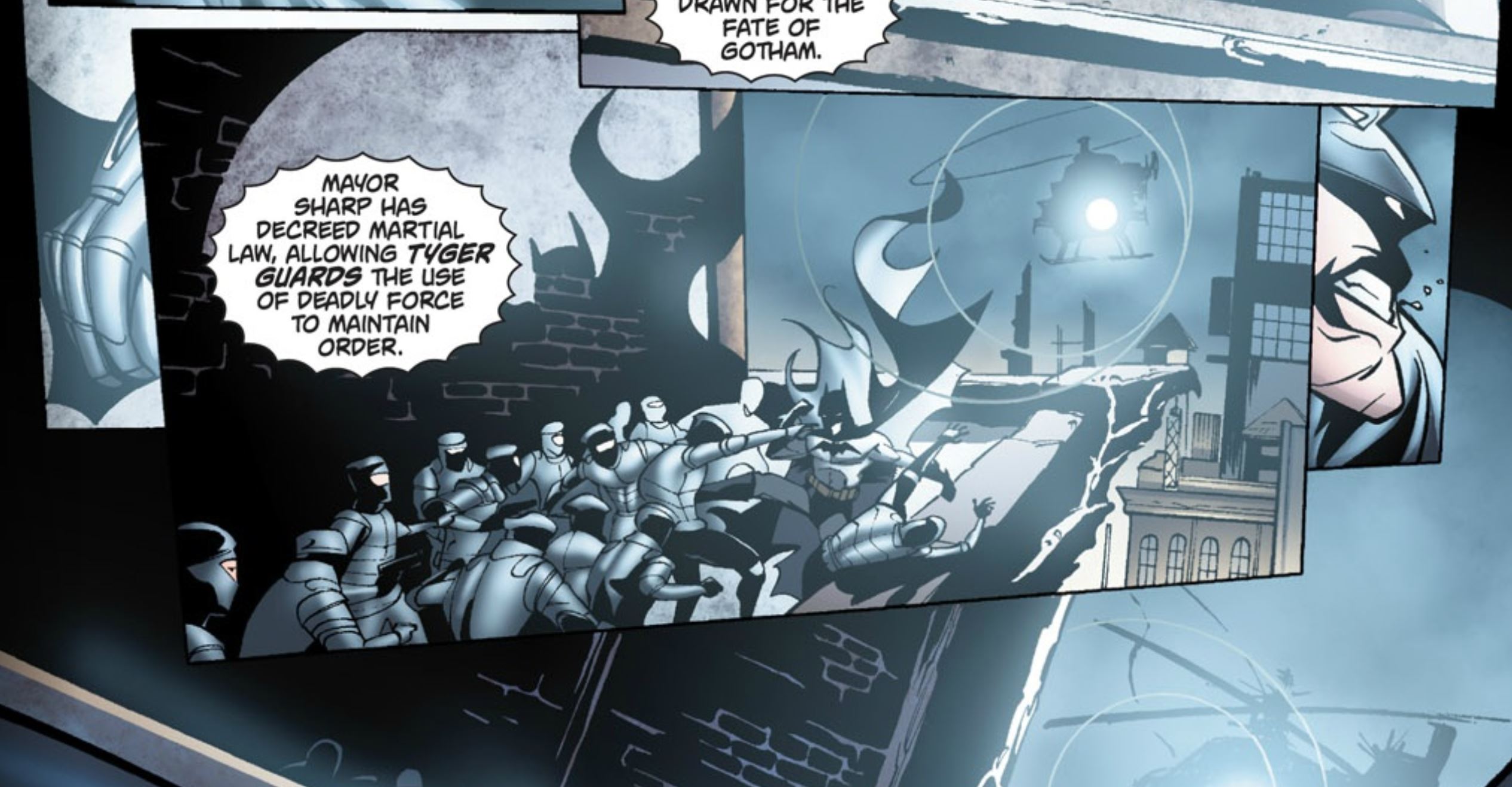 This has allowed Strange to imprison, not just Bruce Wayne, but many other political prisoners: anyone with evidence against him, but also anyone who opposed him. For instance, at least one journalist covering Bruce Wayne's press conference was also detained.

So, in short, Hugo Strange didn't have Bruce Wayne arrested, exactly, and the latter certainly didn't commit any crime. He had him detained by his brainwashed private security guards, TYGER security, which he was able to get away with because Mayor Sharp, whose campaign was bankrolled by Strange's backer R'as al Ghul, gave him essentially unlimited leeway due to his belief that Arkham City would help end crime in Gotham, which in turn was influenced by Strange's mind control.

When Batman gets his suit and attempts to hack into TYGER communications, if you instead listen to the Gotham FM and GCPD radio transmissions through the cryptographic sequencer, you can hear Vicki Vale and Commissioner Gordon discussing the unconstitutionality of this. Gordon orders GCPD to stop any more prisoners from being transferred. He states that Wayne's lawyers are going to have a "field day" with Wayne's arbitrary detention. This was definitely unconstitutional. I think Strange wanted the prisoners to be killed before any legal challenges could be brought up. Check out this walkthrough from the Wii-U version (0:30-1:32): youtube.com/watch?v=jPziWyun6RU

Not the answer you're looking for? Browse other questions tagged dc batman arkham-series or ask your own question.

8
What is the Dent act and how it could possibly work out?
9
Batman: Arkham City (Video Game) - Why did Ra's al Ghul do what he did at the end? (Spoilers, obviously)
7
What animated Batman movie had an old Bruce and young female Robin?
35
Has Batman himself ever taken seriously the idea that he indirectly causes Gotham to have more supervillains?
12
Do people in Gotham know that Batman doesn't kill?
4
What was Bruce Wayne’s alias in The Pit?
9
What was Superman wrong about when he confronted Bruce the second time, in the movie Batman v Superman: Dawn of Justice?