I think I watched this 3-5 years ago on a DVD from the library. The setting is a set of trenches, I'm pretty sure in World War I. A group of English speaking soldiers storm the other side's trenches, only to find them largely deserted. As they explore the trenches, they find go on and on without end or a ladder to climb to the surface. Some of them start to disappear as they fall back. They run into some enemy soldiers (German?), and I think kill at least one who has surrendered to them. Eventually, they have truth revealed to them that they are in Hell (I think with something speaking to them through a dead enemy's lips) due to their past sins, and I think one of them is offered a way to go home, because they're innocent, or at least not nearly as guilty.

I watched this in the United States, in Pittsburgh, checked out from the library. Unfortunately, my wife and I watch most of our films from the library, so searching my history isn't terribly feasible. The title of Downfall comes to mind, but that's a different film about the last days of Adolf Hitler. 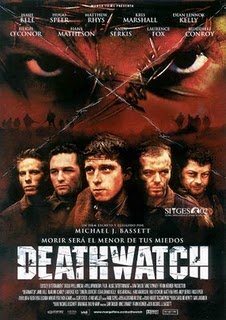 British war horror movie made in 2002. It was the directorial debut of Michael J. Bassett, who later went on to direct the movie Solomon Kane and starring Jamie Bell and Andy Serkis.

Set during World War I, a group of British soldiers "go over the top" in an assault against German lines. However, in the middle of the battle, a mysterious fog descends upon the battlefield and the night suddenly turns into day. Hours later, they finally stumble upon the German trenches only to find a mere 3 German soldiers, petrified and pointing their guns down their own trenches. The British soldiers call for them to surrender, but the Germans are more scared of something in the trench than them. After murdering two of them and torturing the third, the British troops begin exploring the trench, only to find the bodies of more Germans, seemingly killed by friendly fire. Even stranger, the trenches seem to lead nowhere, simply doubling back on themselves. With a prisoner babbling about demons, impenetrable fog, and a broken radio, they quickly form a defensive position and wait for reinforcements that never come.

Though their radio can't send messages, it can still receive them. High command seems rather sure that the attack failed and there were no survivors....

Needless to say, things go downhill from there

I realized this seemed like a very tropeable film, so I searched a few sets of terms until tvtropes horror film trenches worked.

16
Story Identification: young adult fantasy series, possibly published in 70s-90s, christian fiction
3
Circa 60's or 70's film about a woman who steals a dead womans ring and the dead woman rises and comes floating after her
2
Film about the sun reproducing
11
Seeking a pair of stories about an idealist who discovers that winning a revolution doesn't change the stark economic facts
14
Film about man who finds alien orbs on planets
7
Short story about a modern nurse treating revolutionary war soldiers
6
Horror film involving a house with glass windows and mirrors that reveal extra rooms