Did Ochi wield a lightsaber?

In the movie, Ochi barely appears,

but plays a big role as the killer of Rey’s parents. According to Wookieepedia Canon, “After refusing to surrender their daughter's location, Ochi used his dagger to murder them both.”

However, I vaguely remember Ochi wielding a Green Lightsaber (and the dagger) and used it to kill some of his victims.

He is also known as a Sith Assassin, so could this lightsaber be stolen from one of his slain Jedi?

Would appreciate if someone could help verify if such was indeed true in the movie, or I have been mistaken. Thank you!

Ochi isn't a Force user, nor does he wield a lightsaber (of any colour).

A known associate of Imperial advisor Yupe Tashu and the self-styled Acolytes of the Beyond, Ochi was obsessed with ancient Sith arcana. Enabled by Tashu, he pored over forbidden Sith texts and staunchly believed that the extinct order was destined to return to glory. Though Ochi could not touch the Force, he believed the dark side propelled him and shaped his actions. Ochi was no mere relic hunter in the employ of the Empire's most sinister agents- he was also an assassin.

The scene you may be recalling is Luke's (practice) fight with Leia. 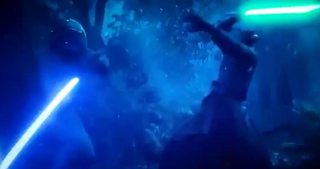 30
Did any lightsaber ever run out of power?
3
Lightsaber canon reference
21
Why isn't Luke's lightsaber red?
4
How did Savage Opress obtain his lightsaber?