Why does Kylo Ren repair his helmet?

Near the beginning of The Rise of Skywalker, Kylo Ren reforges his helmet with the help of some lackeys. A couple of First Order personnel comment on his helmet, but as far as I remember, he doesn't give any reason for recovering and reforging the pieces, especially given that he destroyed the helmet himself in The Last Jedi.

Has this been given any explanation in official material?

The Rise of Skywalker - The Visual Dictionary gives some insight into why he redons the helmet. It is because he is once again becoming the leader of the Knights of Ren. Of course he never stopped being that but he wasn't necessarily active in leading them for a bit.

After breaking free of Snoke's rule, Kylo redons the helmet marking him as a Knight of Ren, but this time on his own terms. The reforged helmet carries the luminous webwork of Sith alchemy - its fused shards mirror the breaking and rebuilding of Kylo's identity.

It also hints at another reason, because he has found out the Sith aren't as dead as once thought. His idol in the Sith is of course Darth Vader, a masked ruler, and so if he is going to go down the Sith route again it's possible he is once again going to mimic Vader.

Kylo's journeys to Mustafar and Exegol reveal to him that belief in the Sith tradition has continued, despite the demise of the last Sith lord. Loyalists seeking to resurrect the tradition have coupled technology and the occult to bring forth unnatural embodiments of the dark side. Kylo comes to learn that he is heir to a vast Empire waiting to be unleashed from the depths of the Unknown Regions. He takes this mantle, but he knows there is still much work to be done.

Snoke made Kylo Ren angry intentionally so he could make the Force-bridge thing between Kylo and Rey. From the transcript

SNOKE: It was I who bridged your minds. I stoked Ren's conflicted soul. I knew he was not strong enough to hide it from you.

Shortly after Snoke insults Kylo Ren's Vader credentials, we get the helmet smashing scene, meaning Kylo's possibly believing it (TLJ makes us think, at least for a short while, that Rey can redeem him).

Major spoilers for Rise of Skywalker ahead

Palpatine wants Kylo Ren to be the next Vader after all. Forget all that Snoke stuff, this is the real deal! Time to get the Knights of Ren back together for a reunion tour. But you can't have a proper reunion without the right headgear (Vader without his helmet is just a sad Billy Joel, after all).

Kidding aside, the helmet seems to be a Sith follower thing (especially for Kylo), which is why Kylo and his band of Merry Murderers wear them. We never see the Knights of Ren without theirs on, even when Kylo/Ben fights them on Exegol.

I believe that the mask is symbolic of his character and personality throughout the movie.

Initially, in The Last Jedi, he is insulted by Snoke: “You’re just a child... behind a mask.” Consequently, Kylo Ren smashes up his helmet, which I believe is a form of rejection of Snokes power over him, ultimately culminating to his assassination of Supreme Leader Snoke.

During The Rise of Skywalker, Kylo Ren remakes his helmet after visiting and pledging his service for Emperor Palpatine once again.

In an interview between director JJ Abrams and Empire, he explains that "Having him be masked, but also fractured, is a very intentional thing. Like that classic Japanese process of taking ceramics and repairing them, and how the breaks in a way define the beauty of the piece as much as the original itself. As fracted as Ren is, the mask becomes a visual representation of that. There's something about this that tells his history. His mask doesn't ultimately hide him and his behavior is revealed."

Kylo Ren does indeed seem to be a very conflicted character throughout the movie, and also the one with the largest personality change: from a power-hungry Sith who adored grandfather Vader, to finally becoming the Skywalker he was meant to be. The mask ultimately highlights the transition between Ben Solo and Kylo Ren, good and evil.

After watching TRoS I had a theory that he repaired the helmet as it was through wearing it that he communicated with Palpatine. Having just read the latest Rise of Kylo Ren comic, I believe even more so that this could be the case, as he uses a KOR helmet to communicate with the current (at that time, shortly after the burning of Luke's temple) Master of the KOR. 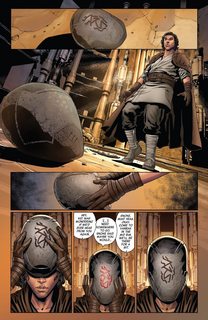 Might not be the answer at all, though it seems a fairly logical reason for him repairing his own helmet in TRoS, as we do see him later communicating directly with Palpatine at some point while wearing it (from memory?)

Not the answer you're looking for? Browse other questions tagged star-wars kylo-ren the-rise-of-skywalker or ask your own question.

6
What does Kylo Ren place his helmet on?
86
Why hasn't Anakin Skywalker's Force Ghost advised Kylo Ren?
9
Are the Sith always trained in lightsaber combat?
8
What did Kylo Ren use to ‘drive’ his Force activity?
13
How did Kylo Ren know how to obtain Darth Vader's helmet/skull?
15
Which predictions of The Rise of Skywalker: Darths & Droids Bingo were correct?