I have a question about some animated movie I saw as a kid in the 90s. The style cannot be described as strictly American/Japanese/European as far as I remember.

I’ve searched IMDb and many other sites and can’t seem to find anything.

I can only remember a scene, where the main character (a guy) was captured inside some kind of egg with a woman. He removed a bullet from his gun, dropped it on the bottom of the egg and the bullet started to grow into spikes/spiked trap and cracked the egg allowing the heroes to escape.

It's the French film "Gandahar", directed by Rene Laloux. 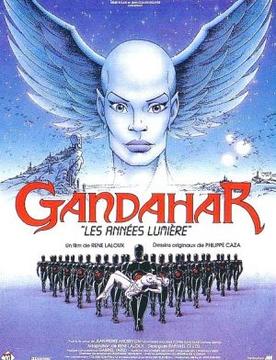 Summary of the most relevant part of the plot for this question:

Gandahar is a utopian world where biotechnology is used exclusively. Even its weapons are biological.

A government agent, Sylvain, is sent to a remote location in Gandahar to investigate a mysterious threat: attacks by unknown mechanical men who throw lightning bolts that turn their victims into stone and then kidnap them to take them to an unknown location.

Sylvain is turned to stone and taken prisoner by these beings. He wakes up inside a kind of egg in the company of a beautiful, bare-breasted woman from Gandahar. The egg is eventually snatched from the robot men by a benevolent Godzilla-like monster who believes the eggs are the offspring of his own species.

Sylvain uses his last bullet of biological ammunition to free himself from the egg. This bullet, upon falling, sprouts into a kind of spiny plant that breaks the shell and releases the two prisoners. 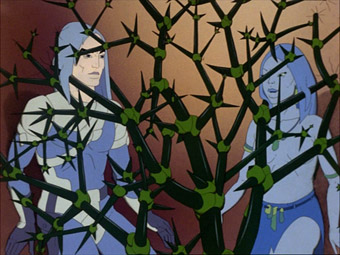 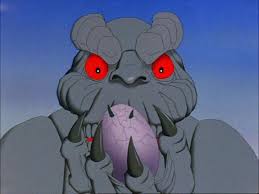 6
Movie where a memory is switched between people which helps to solve a murder
6
90s sci-fi movie where the alien invaders are worm-like?
8
Animated movie with time travel and where people where enslaved in mines
8
Modern movie where rich people can buy a personal assistant that sit in a small egg
7
90s Sci-Fi movie where people were rabid; main characters looking for orange vaccine
8
1980s/90s horror movie where a group of friends go to a house where monsters and contagious illness are waiting for them
6
Japanese animated movie where a plague that turns people into stone spreads across the Earth
17
Animated 70s/80s movie or series with haunting soundtrack and an egg shaped spaceship
9
Movie where people are trapped with no connection to the outside world but have food and water