I'm looking for a turn-based strategy fantasy game I played in the late 90s on a Windows PC.

From what I remember the game is based around managing a (medieval?) village with different classes of characters (including at least warriors, wizards and bards).

Each turn you could set each villager activities including farming and practicing their skills, maybe also construction, item making or gathering other resources (wood, etc.).

The village is routinely attacked by other humans and monsters, so the villagers needed to be fairly versed in their own skills, but they also needed to be fed.

There were turn based battles where you had to move your villagers and attack the invading forces. Warriors attacked with handheld weapons, wizards with magic and I think bards had magic for attack and healing.

Characters could be given items or weapons to improve their stats. I'm unsure if these items were made in the village or captured off enemies, possibly both.

I think the aim of the game was to build a strong enough army to attack the monsters on their own land.

I think the village was displayed in an isometric grid.

While looking through an abondonware site, I found the game I have been looking for.

It is Celtic Tales - Balor of the Evil Eye released in 1995 for DOS.

The three character types are actually druids, warriors and bards. Both druids and bards could use magic spells.

Each turn you could set your heroes (villagers) tasks to help improve your village and skill levels. These include:

Items are made in the village and can be given to heroes to improve one or more of their skills.

The aim of the game was to take over the whole of Eire and then attack the Formors (monsters) stronghold on a nearby island. New areas can be taken if empty or can be conquered. You can also make other villages vessels (of varying levels) using diplomacy (tribute, trade and making requests).

Each village you manage can be attacked or raided by neighbouring villages or attacked by the Formors.

The main game screen is an isometric view of the village. 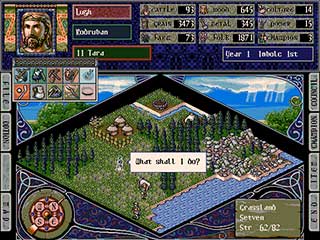 10
Book where a boy and girl are transported into a fantasy video game
12
Anime Movie: Floating Islands, Post-Apocalypse Fantasy/Steampunk, Clans at War, Brother and Sister
13
Looking for a SciFi RPG I played in my childhood about a girl who is a hologram who fights aliens
6
Cartoon: 4 kids transform into video game characters to save the world from a hacker and an evil program
3
Steam PC game that was a combination of Diablo-style "run around and stab things" and city-building
7
Strategy Game - 90s Cyberpunk City Gang Control
6
DOS Go/Othello/Reversi clone with creatures/monsters like Snowmen instead of stones
17
Maze-game with top-down perspective, each level you need to kill monsters and destroy their dens