I read a book several years ago on my Kindle app. The book was advertised for free on free ebook sites. It was about two warring alien races who crash-land on earth and end up influencing and guiding the development of mankind. They had a secret base under the Sphinx. The pyramids had gravity technology.

Could it be Mark Henrikson's Origins series? 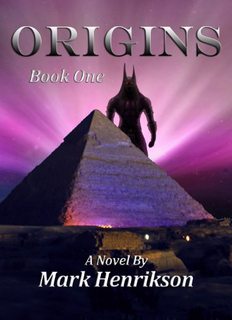 Archeologists working in the Giza plateau make new discoveries about Egypt’s past. Recorded history of the Great Pyramid, Sphinx, even Moses and the slave exodus to the Promised Land are drawn into question as they unravel the mysteries they find and encounter elements intent on preserving those secrets.

A patient in a psychiatric hospital may be the key to it all. Hastelloy is convinced he’s locked in a battle for humanity’s survival with the mysterious species Alpha that has spanned the course of human history since ancient Egypt. Is he crazy, or is it crazy to ignore him?

Meanwhile, NASA and the National Security Agency struggle with the future of mankind amid the launch of a new deep space probe capable of broadcasting a message that will be heard by others. Some believe it can propel humanity to new heights, others insist it will bring about the end of mankind. Both sides will stop at nothing to further their cause.

Mankind’s past, present and future are revealed in this gripping thriller that does not let go for a single page, and has enough twists and turns to test even the most sturdy safety harness. The Origins of all will be revealed.

One of the reviews mentions that two alien races, the Novi and the Alpha, crashlanded on Earth, and have been influencing human history, the first book covering their meddling in Egyptian history, specifically Jewish history (which would kind of fit with you thinking of Jesus). The second book specifically says that it has alien meddling with the Jesus narrative.

I haven't found a free copy, but I've found a few sites promising $0.99 with their code.

Title found by searching for kindle novel aliens pyramids sphinx, which led me to one of the discount sites.

Not the answer you're looking for? Browse other questions tagged story-identification novel aliens pyramids or ask your own question.