Are there any designs for Sulu's rising targeting scanner prop from Star Trek: The Original Series?

At some point in the second season of TOS, Sulu's console got an upgrade to include a scanner that rises out of the panel to his left. I have always been fascinated by the motions this scanner goes through as it rises out of the console.

What I'd like to know is if there are any dimensioned drawings for the prop as used on the original set, especially of the linkages which produce its motions. I'm convinced it is just a couple of uneven links, but I can't figure out the proportions or sweeps from retracted to deployed position. I'd be surprised if the original prop still exists from which a copy (or drawing) could be made; I'd also be surprised if any drawings were ever prepared to build the prop, that the prop accurately followed such a drawing, or that such a drawing (if it ever existed) survives to this day. Given all that, I'd settle for a "reverse-engineering" provided it accurately reproduces the motions as seen on-screen, and does so at the correct scale.

The attached image captures the scanner in mid-motion. It is from the episode "Friday's Child" at about the 40 minute mark. The in-story point is where Enterprise has been searching for a supposed ship in distress; unable to find it, they deem the distress call to be a Klingon lure and return to Capella IV. The immediately preceding on-screen action has Scott standing with Chekov at Spock's scanner station; Chekov states that a Klingon warship has taken up position directly in Enterprise's path; Scott orders Sulu to sound battle stations; shot cuts to Sulu and we see the scanner emerge. 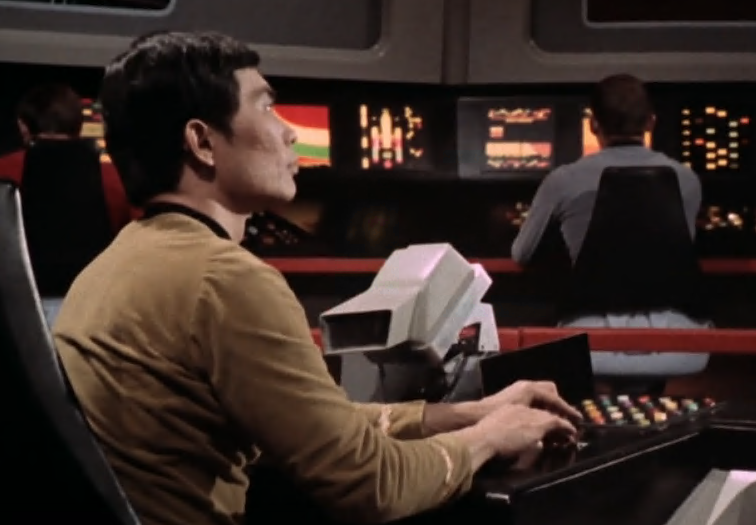 These aren't exactly what you're looking for but they might help.

First up we've got a series of close-up photos of the replica targeting scanner built for the TNG episode "Relics", which was ultimately never shown onscreen: http://www.startrekpropauthority.com/2010/09/tos-style-helm-targeting-scanner-from.html

And here is a set of blueprints for the TOS Enterprise bridge by Michael McMaster. Sheet #4 shows the targeting scanner and feature a scale, so a little creative work might let you figure out the dimensions: https://www.cygnus-x1.net/links/lcars/mcmaster-uss-enterprise-bridge-blueprints.php

Not the answer you're looking for? Browse other questions tagged star-trek star-trek-tos props or ask your own question.