In the 1960s I saw an animated film on American TV, I think on The Wonderful World of Disney, that showed the future of road-building. It may have dated to the 1950s. [Among other projected advances, there was a large machine that obliterated everything in its path by shining a road-wide beam of light ahead of it -- presumably a "heat ray" rather than a laser -- and leaving a new road behind it. My fragmented memory has a striking scene of this machine cutting through the Amazon rainforest at night, and it says much about those times that the theme was entirely one of progress, with not a thought for the environment, wildlife, or original inhabitants of the region.]

Another scene that I think was from the same film was not intended to be taken seriously. It had a car with concrete wheels bouncing along a rubber highway in place of the usual rubber-tired wheels rolling over a concrete highway. What was this movie?

UPDATE: I evidently conflated two memories in this question. As both have been answered, and the answers are different, I have split the question to allow both to be properly credited. I have changed the header of the original question, which was answered first, to focus on the car with concrete wheels on a rubber highway. The memory in square brackets has a different answer.

I suspect you're looking for a 1958 episode of Walt Disney’s Disneyland, "Magic Highway U.S.A", which had a few animations including a 9 minute animated feature at the end, "The Road Ahead". 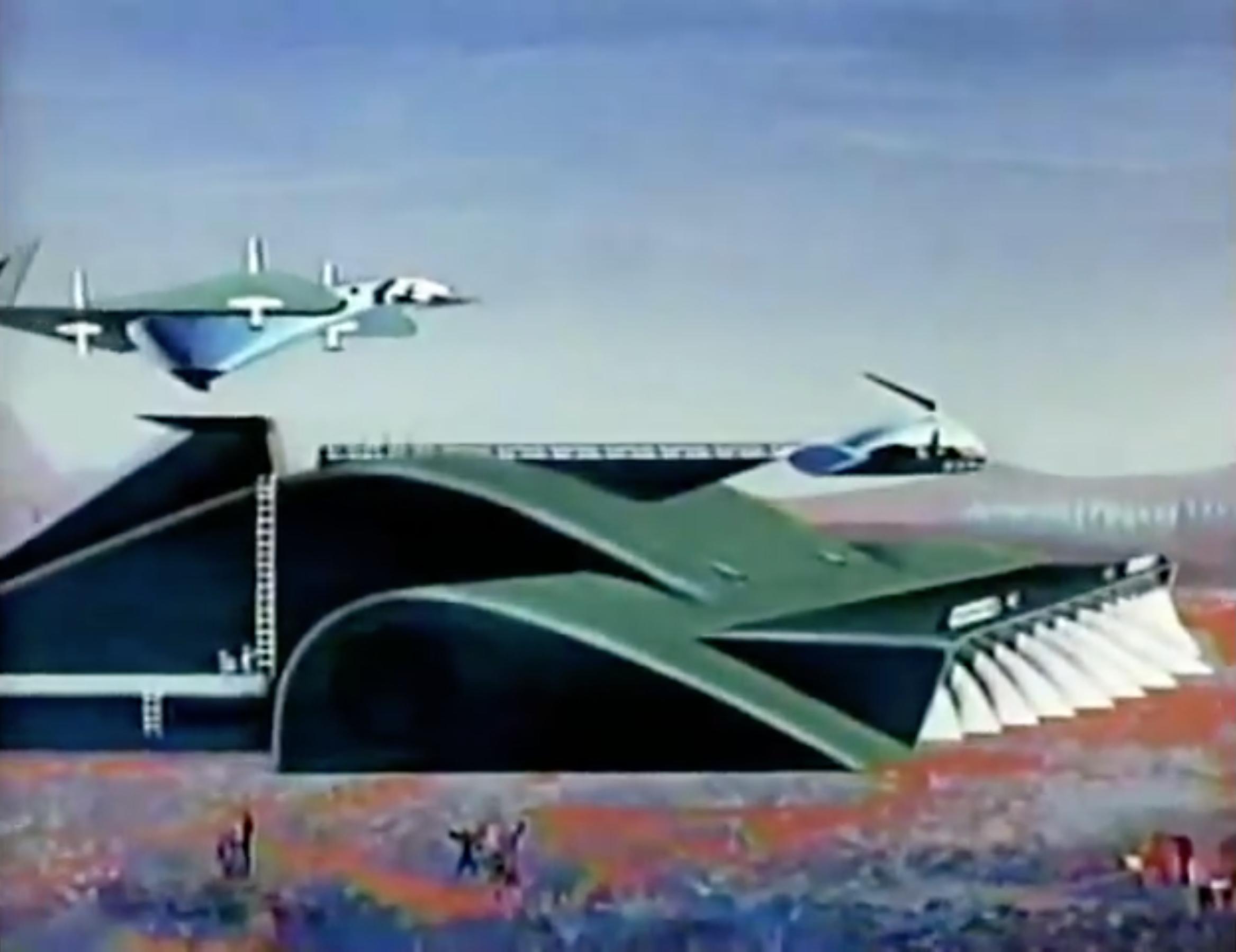 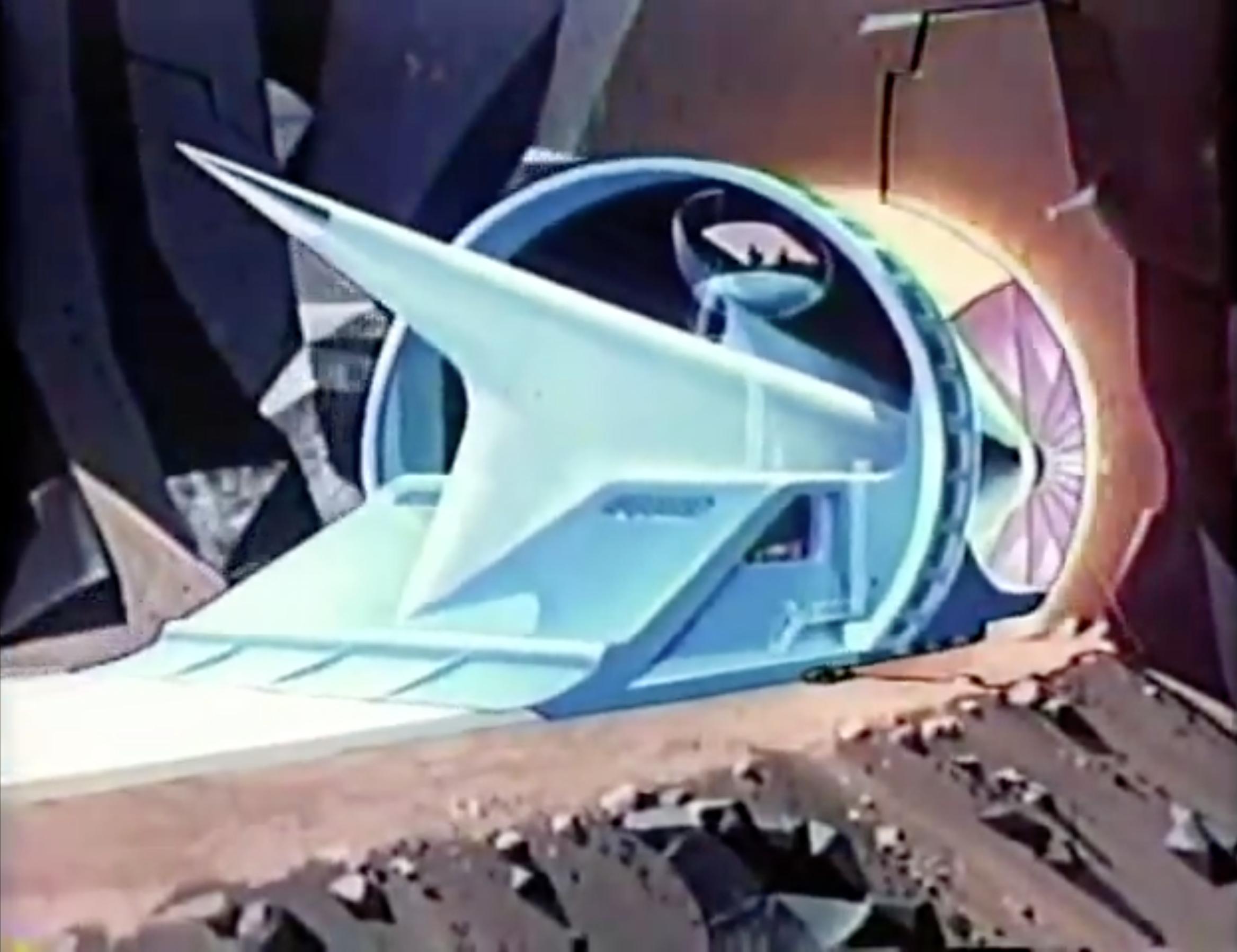 You can read a bit about the episode in this article entitled, "Animating the Future".

Tomorrow’s roads are to be built with giant devices that lay out pavement like a red carpet; bridge-building machines cross valleys and rivers. Obstacles like mountains are easily navigated using our old friend atomic power to melt through the rock. Arthur Radebaugh depicted similar ideas in “Closer Than We Think,” including a version of “the new jungle-smashing LeTourneau ‘tree crusher”’ and an atomic reactor that would “fuse the earth into a rock-hard, glass-smoothed surface.”

You can view the entire film on YouTube (The concrete wheels on a rubber highway are at 36:35. The intro to "The Road Ahead" starts at at about 39:21):

Found with a search for disney future road-building laser.

The article I linked also mentions that the Chicago Tribune "Closer Than We Think!" newspaper feature had a similar piece on roadbuilding machines. 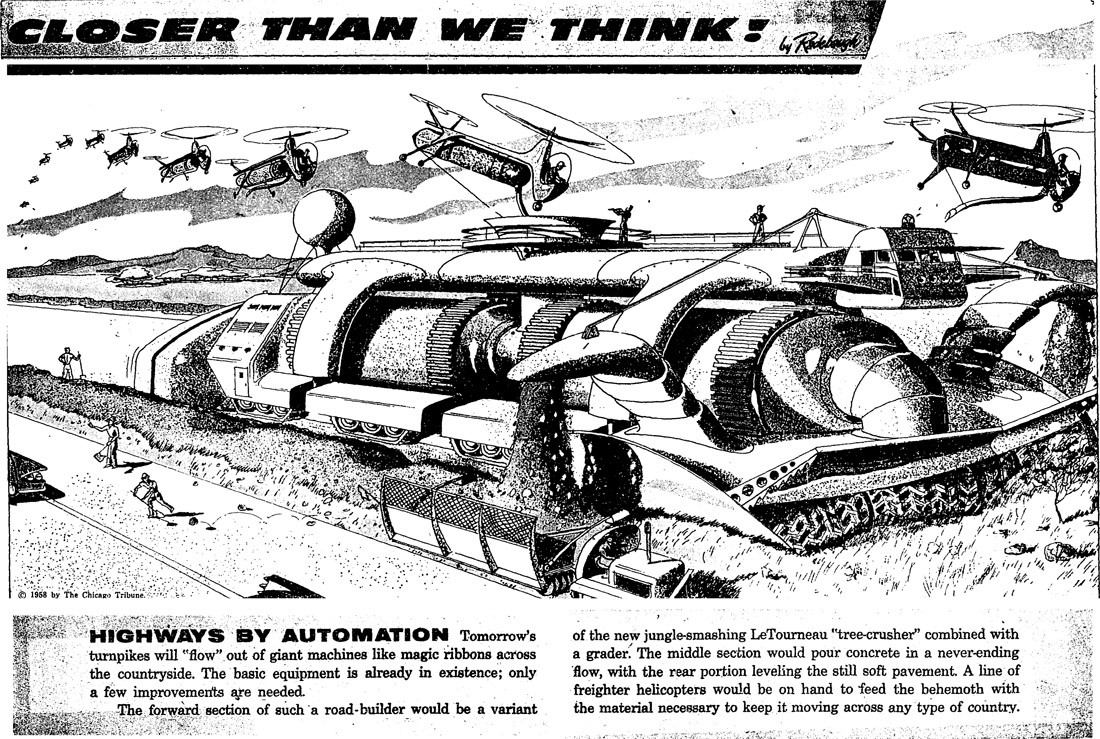 Tomorrow's turnpikes will "flow" out of giant machines like magic ribbons across the countryside. The basic equipment is already in existence; only a few improvements are needed.

The forward section of such a road-builder would be a variant of the new jungle-smashing LeTourneau "tree-crusher" combined with a grader. The middle section would pour concrete in a never-ending flow, with the rear portion leveling the still soft pavement. A line of freight helicopters would be on hand to feed the behemoth with the material necessary to keep it moving across any type of country.

However, it is not an animation, but a still image.

Not the answer you're looking for? Browse other questions tagged story-identification movie disney or ask your own question.

5
Late 50s early 60s sci-fi film: Astronaut becomes melded with his equipment
12
Film where the government was corrupt with aliens, people sent to kill aliens are given rigged visors not showing the right targets
6
1950s-60s B&W horror/sci-fi movie with news report of a "beast of seemingly gigantic proportions"
6
Roadbuilding machine plowing through the Amazon rainforest using heat beam
12
Can you identify this apocalyptic youtube film about a scrap metal robot?
5
What is this animated French short film that looked like a Disney film with a little touch of anime?
7
Eerie stop-motion short film about a character with amnesia in underground, concrete tunnels