Moff Gideon's dark saber, what is this, and is he a Force user?

In the last episode of The Mandalorian, we see Moff Gideon's TIE fighter crash on Navarro.

He cuts himself out of the wreckage with a strange weapon others have called a "Darksaber."

What is this weapon? How did he acquire it?

And does this give any indication that Moff Gideon is a Force user?

What is this weapon?

It's not a darksaber, it's the Darksaber.

The Darksaber was an ancient and unique black-bladed lightsaber created by Tarre Vizsla, the first Mandalorian ever inducted into the Jedi Order, prior to 1019 BBY.
source: Wookieepedia - Darksaber 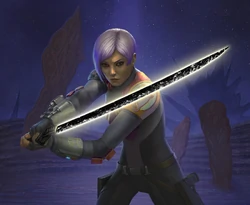 How did he acquire it?

No one knows yet. The last known possessor of the Darksaber was Bo-Katan Kryze who was gifted it by Sabine Wren before The Mandalorian showed Moff Gideon as the current user in S01E08 - Chapter 8: Redemption (season one finale).

The episode's subtext suggests that Gideon stole it from Mandalore during the Great Purge of Mandalore, in which the evil Galactic Empire wiped out most of the Mandalorian people.

And does this give any indication that Moff Gideon is a force user?

No. Despite the Darksaber's origin story and being possessed by at least two other force users¹, it has been possessed and wielded by several other non-force users² with no ill effect.

² Pre Vizsla, Sabine Wren and Bo-Katan Kryze were non-force users that possessed and wielded the Darksaber

5
Can a Force-user split an atom with the Force?
5
Can a Force User shape reality?
9
Has any Dark Force user/ally ever said "May the Force be with you"?
5
Old Star Wars Legends book set after ROTJ
6
Why do the heroes in Star Wars keep letting their Force-sensitive foes detect them?
49
Is there an in-universe explanation given to the senior Imperial Navy Officers as to why Darth Vader serves Emperor Palpatine?
5
Why did Ahsoka Tano struggle in her fight?