How did Geralt and this character know each other?

In season 1 episode 8 of The Witcher, Geralt meets

Princess Ciri in the woods. She runs to him and they embrace.

However, I'm pretty sure

she's never seen him before, and he's only seen her handmaid (who was being passed off as the princess).

Wouldn't they be strangers to each other? It seems like the show leaves a lot of things unexplained. Book/game answers are fine if applicable. (I haven't read or played any of them.)

... very briefly during the attack on Cintra

While various fan sites declare that the queen showed him an imposter when he returned and before he was imprisoned,

Geralt is even present when Calanthe jumps to her death, while at the same time, Mousesack ushers Ciri out of Cintra.

he got a glimpse of her on her way out the door. And there is also that brief moment where Geralt sees Ciri playing Knuckles when the handmaid wishes her goodbye to Her Highness; she turns towards him (even if she does not see him). (Thanks @Philip Klöcking).

(If I remember this right, it is a subtle replay of a scene in Episode 2 where she is playing kunckles and she looks to her left, but we are not sure what she sees ... so I'll watch Episode 2 again. :) )

He had met her mother, and perhaps the family resemblence is very stront.

when much of the season had Geralt operating in a different time periods than that of the fall of Cintra.

A narratively based answer is that she recognizes him as Geralt of Rivia (The Witcher) and he recognizes her as "the girl in the woods" (whom Renfri had foretold in Episode 1) because of destiny. This fits the story to date because ...

Destiny appears to have narrative agency in this series

In this series, as shown by what happened to Queen Calanthe when she tried to thwart destiny by denying the Law of Surprise, destiny has tangible agency.

... they are inexorably drawn together, and don't need to be especially familiar with each other visually to know each other.

Another in-universe point to consider:
(Thank you @ – goat_fab)
Geralt was familiar with the royalty of Cintra, and Witchers aren't that hard to identify - especially Geralt with his unique mutations and his storied history. From previous episodes, we know that a bard had made a career, years before Ciri's birth, of advertising the exploits of Geralt in various songs.

In the book and in the original script, Geralt would meet Ciri much earlier, before the fall of Cintra - Ciri ran away from her grandmother after being promised as a future wife to some prince that 8-year-old Ciri (obviously) didn't love. Geralt takes Ciri back from the driads and leaves her with Mousesack, contrary to both druid's and girl's wishes.

The meeting on the farm in the original script looks like this: 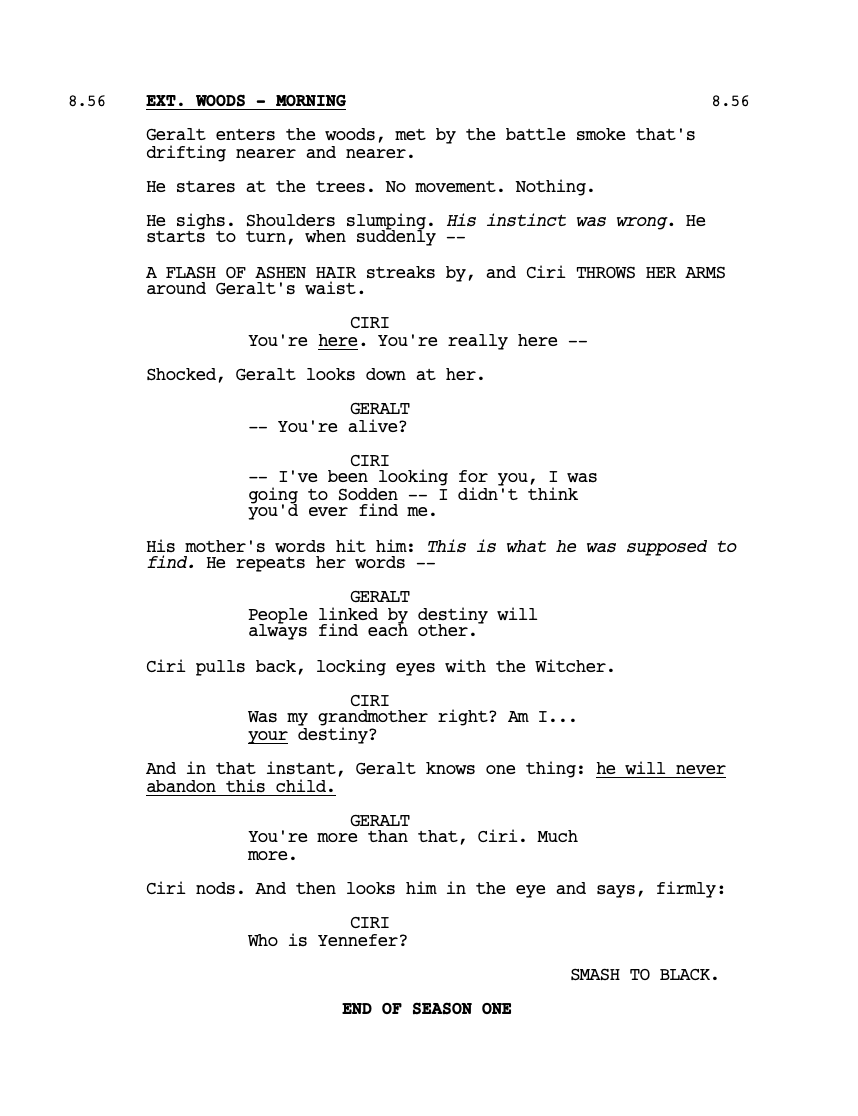 But the director decided to change it:

Perhaps the most significant change from Andrzej Sapkowski’s novels was Geralt and Ciri’s first meeting, which happens in the final scene of season one but occurred a fair bit earlier in the books. Addressing this matter on twitter, The Witcher showrunner Lauren Schmidt-Hissrich explained why the decision was made to remove Geralt and Ciri’s early meeting in Brokilon Forest as depicted in the short story The Sword of Destiny, and reveals the script of the season’s original (and more book-accurate) final scene.

Here’s our rationale: to adapt the short stories that were important to world-building, and then to sequentially adapt Geralt and Ciri’s multiple meetings in [The Sword of Destiny] meant that we wouldn’t introduce Ciri until (at the earliest) season two. Which makes sense, if you’re a fan of the original books.

"People linked with destiny will always find each other."

When all of these points are considered together, why wouldn't they recognize each other and be happy to finally meet?

Geralt has extremely acute senses as a Witcher. He's one of the greatest trackers in the land.

So he can identify you by your scent alone. He briefly saw Ciri during the attack on Cintra and that's how he was able to know the Queen had tried to placate Geralt with an imposter.

Due to the "Law of Surprise", Ciri was bound to Geralt by law before she was even born. The Law of Surprise is not taken lightly; so Geralt and Ciri where aware of each other.

In the novel, events were different: when Ciri was 5, Ciri's maid tells her that she's destined to become a witcher.

And later when she was 10 years old; she's rescued by an unknowing Geralt and brought before the Queen of the dryads. The Queen wanted to turn her into a dryad and that's when Ciri revealed her destiny to become witcher and that's when Geralt knew she was the child of surprise promised to him.

Not the answer you're looking for? Browse other questions tagged the-witcher or ask your own question.