Who is the fourth character in this rescue sequence during the Battle of Exegol?

At the end of the movie Star Wars: The Rise of Skywalker, there is a sequence of Lando and Chewie manoeuvring the Millennium Falcon in order to rescue Finn and Jannah mounted on a command ship near to collapse.

In a previous shot we can see Lando driving alone and later on Chewie emerging from the hull trying to catch Finn and Jannah but at the same time we can see what looks like an arm of Han Solo alongside them (of course this is impossible), thus, I ask which character is that?

I've watched the scene back a few times and we only see 3 characters on top of the Falcon: Chewie coming out of the hatch and Finn and Jannah who just jumped on top of it. Watching it slowly I think the arm belongs to Jannah and it is one of her "wristlets" that you are seeing in the still.

The film's novelisation indicates that the only people on the roof of the Steadfast were Finn and Jannah. The feature you're looking at is Jannah's distinctive curved bow. 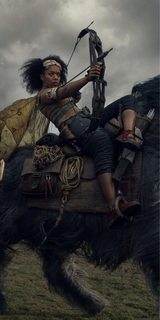 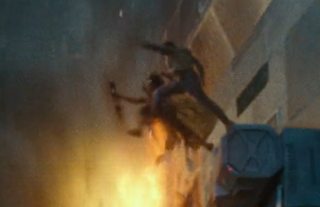 Finn almost lost his grip when he saw the Falcon’s hull rise below him.

“Jannah!” he yelled, surging with hope.

They would have to time this just right. They’d have a few steps of running room along the side of the comm tower, and then nothing but air.

They gripped hands. Not just yet…Now! They took off running as Lando guided the hull closer. With all their might, they leapt…just as the Steadfast finally succumbed to gravity and dropped toward oblivion.

They landed hard on the Falcon’s hull; Finn’s ankle twisted. A hatch opened revealing Chewbacca, who waved at them to hurry. They sprinted across the top of the Falcon, Finn’s ankle screaming with each step, and finally dropped into the hold.

“Chewie, you got the kids?” Lando hollered from the cockpit.

Chewie roared confirmation, and the Falcon sped away.

Finn collapsed against the wall. He couldn’t believe they’d survived.

44
Who is the guy in the gunner's seat of the Millennium Falcon near the end of The Rise of Skywalker?

35
What was in the Star Destroyer Avenger's garbage?
20
If the Millennium Falcon is so easy to track, why was it used to go to Luke's super secret location?
8
Where do X-Wing fighters—and similar small scale Rebel craft—dock to refuel and tune up when in space?
14
How did Rey get her blaster back?
8
How was the Resistance able to rescue this character?
12
Which predictions of The Rise of Skywalker: Darths & Droids Bingo were correct?
7
How did Pryde get to Exegol to participate in the Battle of Exegol?
11
How did this character fly this ship?